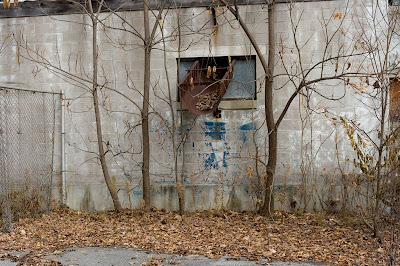 I enjoy the calm matter-of-factness of this series - dispersed subject matter, not always figure and ground. This one in particular has quite "energetic" edges compositionally. I use Pentax K10d, but it is not alone in having a viewfinder coverage that is not even close to 100% of frame. One's intuitive framing is based on what one sees there - have you cropped images such as these down to mimic that, allowed for it, taken half an extra step forward, or accepted and lived with surprises at the perimeter of shot?

Good question. The answer, mostly, is "allowed for it." The lack of exact framing in the finder is a major annoyance. With static subjects like this it's fairly easy to anticipate the actual framing while settling on the final aim point for the camera. At this point I do that pretty much unconsciously. With action pictures made of moving subjects I sometimes have to use the ACR crop tool to trim away unanticipated intrusions at the edges. It amounts to setting the edges to what was actually visible in the finder.

Thanks for satisfying my curiosity - I am considering the notion of applying an automatic crop across the board (probably two presets needed: portrait and landscape). I use Lightroom, so further fiddling around with the crop is easy at any stage; but "as I saw it" is surely a good starting point. It will take a bit of getting used to, at the camera end of things; as you say, we adapt.

Plus: how pleasant to be able to just sneak the crop frame outward a bit when one needs to!