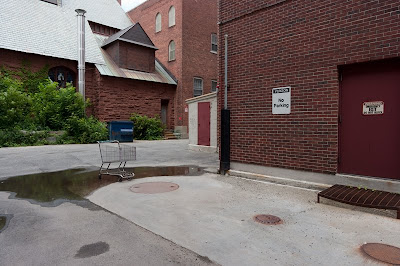 More to see at The WPII Blog and at The Public Eye Blog.
Posted by Carl Weese at 6:00 AM

for whatever reason, i almost believe that shopping card belongs there - not sure why, but it fits! on another topic entirely, I noticed the last couple of posts are from Pittsfield which I don't think is all that close to you. yes/no? did you set out for this city (is it a big city?) or just ended up there? I guess what I am asking is that photographers, i think, are ultimately interested in the search for content to support some idea or answer some question (wandering to see what is there counts as well). And once at a location, how much time do you usually feel you need to get 'comfortable photographically' with the subject? Since I don't usually carry that many holders, I tend to work slowly, or not at all, on the first visit - and I tend to be very focused on the drive to wherever I am heading (ya, that's looks nice = but I got to get to....) . My question is: how do you handle a new site? Is it different when you are using digital capture v. 7x17"? I have always admired guys like Franco who can just go into a situation and make great photographs. I would be..."could you stage that rally again please?"

Lyle, I went to Pittsfield on July 4 because I learned that they stage an enormous parade. I posted pix from the parade on WPII a few weeks back. These shots were made while wandering around the town after the parade crowd broke up.

I'm familiar with the city because it's "on the way" to several other destinations (like the Clark art museum in Williamstown). It's visually fascinating but nearly two hours away so not a place I can just go on the spur of the moment for a quick shoot.

I find a pattern where I get good pictures from a particular place either immediately on first encounter, or based on long familiarity. There's a gap in between there where nothing much happens, though I suppose what's happening is the acquisition of that deeper familiarity.

I like this one. It has that geometric thing going on that I'm always trying to achieve.

Yes, I see that in some of your recent posts you're moving toward a more formal approach to architectural subjects. In this shot I happened to be wandering around town on foot with a hand camera, but the way this picture comes together, it wouldn't have looked much different graphically (tech is a whole different issue) if I'd shot it with my 8x10 and 165mm lens. Either way a level/plumb camera with a rather wide lens, positioned at about my eye level, framed just what I wanted and happened to render the buildings in "correct" architectural perspective.