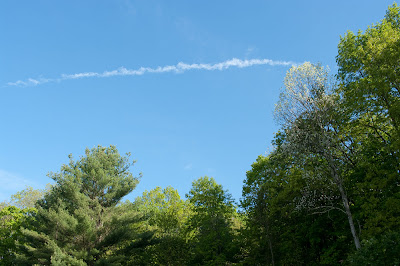 Woodbury, Connecticut
Posted by Carl Weese at 5:34 AM

There aren't many works of man that compete for magnificence with nature. But the unrepeatable track of an aircraft crossing the sky is one, for me. The way it jumps into solidity, then softens and complicates, then fritters away... fleeting and graceful. That's mixed with a notion of the plane as escape and new possibility. What the sails of a ship would have been, for previous centuries.

Richard, there's also a whole subset of wingnuts who are convinced that contrails are really a huge plot to spread chemicals that establish mind control over humanity. The observable absence of such control doesn't seem to dissuade them.