Now, That's a Weed! and Anniversary 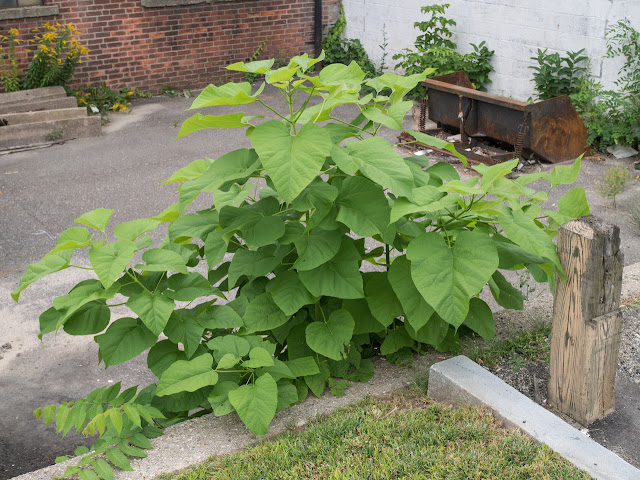 This is a strange date in the calendar for us, Bettina and me. It's the date of the national trauma that happened in 2001. It's the date we got married in 1971.

I'd found a placekeeper job immediately out of college, in the PA area, to build up some resources to begin freelance photography, because she was switching from the National Academy, to the Pennsylvania Academy of Fine Arts (because her favorite teacher at the first, [an established artist who taught only for the love of it] told her PAFA was the real school, just go there).

We found a justice of the peace (we're atheists and needed only a civil ceremony) who didn't charge much, located in the close suburb of Upper Darby. A school friend of Tina's, along with one of mine with his girlfriend, showed up to our studio apartment in West Philly to become our wedding party, and we drove ten minutes out. The Wedding Hall was the basement of the JP's house, which wasn't large, or high ceilinged. It was full of a wedding party in bright colors for the women, and cheap rented gray fancy suits for the men. There was a problem.

The groom wasn't there.

They rushed us in ahead. The JP bore an amazing resemblance to Bugs Bunny, though bigger, I guess, and Tina thought I was over-serious about the civil vow part, but Robin made up for it by yelling honking horn sounds out the back window of our 1970 VW all the way back to the apartment. Tina opened a jar of Ragu and made spaghetti.

Never learned what happened with the other wedding party.

We're off today to a show Tina found at SUNY New Paltz that looks interesting. We'll find a place to have a nice lunch, if we're lucky.

Email ThisBlogThis!Share to TwitterShare to FacebookShare to Pinterest
Labels: behind the scenes, weeds

Well, that's interesting. Michelle and I also married on September 11, in 2004. In our case in her mom's back yard, with a preacher and friends and family. Happy Anniversary! - David Littlejohn

Same to you David, may you have many more.

Interesting confluence: wedding party & PAFA. One of the fanciest wedding receptions I have ever attended was held in PAFA.