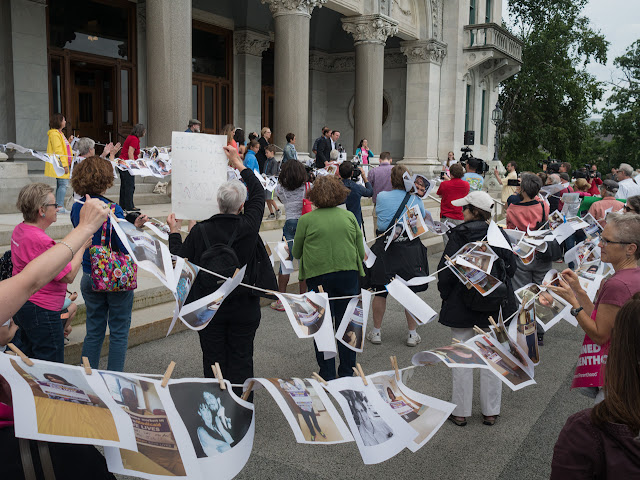 There was a health care support rally Saturday morning, sponsored by several organizations, at the Capital Building in Hartford, CT. The idea was for people to send in pictures, digital files of snapshots of people who need healthcare, as in, everyone. They printed them out on letter size paper and set up half a dozen clotheslines with the 700+ submitted pictures. Then they got volunteers from the crowd of several hundred who had showed up to pick up the lines and display the pictures. A strong wind made this complicated, but everyone adapted.

Both of the state's senators showed up to address the crowd. Chris Murphy is speaking in this picture. State representatives were there as well, along with speakers from the organizers. Senator Blumenthal, stretching his talk a bit because Murphy was stuck in traffic, emphasized that the fight is only engaged, the war not won. Also, both made obligatory salutes in their remarks to John McCain for his vote, and then each stated firmly that the real heroines of killing the "skinny repeal" were the two Republican women senators, from Alaska and Maine, who had held out steadfastly against it all along, joined only at the last minute by Mr. McCain. Good point. More to follow when I do a close edit of the pictures.
Posted by Carl Weese at 5:41 PM