Walking to the Sun 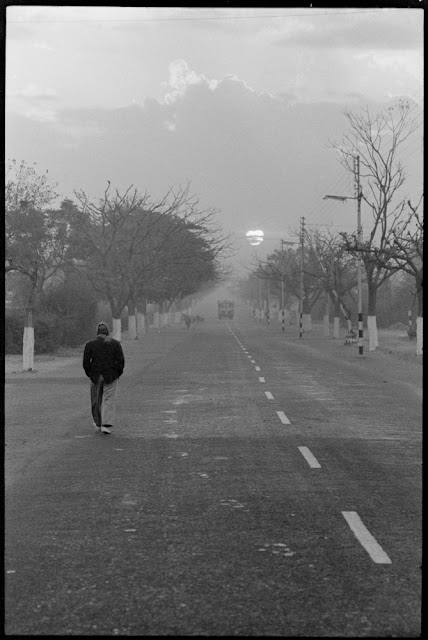 Another picture from the 1969-70 IHP scholarship trip that I never printed before, but really like now.

A couple private questions have come in about what I was shooting with way back then, so a little bit of techy-doo. I had a Leica M4 with 35mm Summilux, and a 28mm Elmarit that I bought in Hong Kong (as planned long in advance) about eight weeks into the trip. Also a Pentax H3v with 55mm and 105mm Takumar lenses. Gossen Luna-Six light meter. Tri-X film.

To return to the editing theme, the twelve-shot edit I've referred to a couple times in recent posts was done around 1990, twenty years after the trip. Reviewing everything, I'm surprised to find that I mostly agree with the edit, in the sense of if it has to be just twelve pictures, these are the ones. The interesting thing is if I open it up to two or three dozen selections, they would include pictures I printed shortly after the trip, and a few that I never noticed before. An interesting side point is that the twelve-shot edit is all from Leica shots—not because I was being snobbish about it but because at that point I was in a pretty extreme position of preferring short lens work (probably a reaction to the commercial work I was doing to make a living at the time where long lens work was very much au courrant). I still vastly favor short lenses (as I can examine with a couple clicks in Bridge to see what lenses were used for last month's pictures, not to mention that I don't even own any "long" lenses for any of my large and ultra-large format cameras). But still, there's a look to a tightly cropped viewpoint that just somehow works, every now and then.Very seldom for me, but sometimes. This must have been made with the 105 Takumar, and I like it.
Posted by Carl Weese at 5:00 PM

As you know, I don't speak techy-doo, but it's still fascinating to hear your thoughts on the broader question of how youthful work and judgment stand up fifty years later. That's a question important to a lot of us, and your answer is mostly encouraging.

Bill, I think what interests me is that I studied the material very closely twenty years later, and made the tight twelve shot edit. Twelve or fifteen years after that, when I wanted to put the work on my web site, I did not study the work again and do a new edit from scratch, I simply searched out the twelve negatives from the 1990 edit and scanned them. This time, another fifteen years or so later, I needed to go through all of the proofsheets methodically, looking not to edit for the best pictures, but to locate the most interesting snapshots of fellow students and group activities. But doing that made me see that there was good stuff beyond the dozen picture portfolio, and even a few things that I'd never printed before, either as part of the academic credit project, or for portfolio use.

So the work is youthful, the edit to twelve not so much. It was part of what I joked was a 'midlife crisis portfolio' because—at about the age of forty—I made a set of exhibition quality prints with a dozen selections from each of my largest personal (not connected to my professional assignment career work) projects. So I'm also not surprised that I'm in basic agreement with my forty year old self as to what a very tight edit of the IHP year pictures should look like.

A fine image, Carl. Besides that I can connect to the conveyed mood and recognize archetypal elements evidently unchanged until my visit to India 9 years later, it could be that compressed perspective of the longer lens that triggers my interest. Unlike you I like to see in that narrower angle of view, probably between 40mm and 100mm in terms of full frame lenses. Some of the most interesting images I made in recent times are based on a 40 years old Minolta 58mm lens.

This buisiness of prime lens focal lengths can be very picky. Sticking to 35mm (or FF) format, a 50mm lens is much more useful to me than a 55 or 58, while a 35mm will suffice for more than half my pictures. However, I'd hate to go out without a wider lens, and a 24mm is more useful to me than a 28, and I don't really need anything wider except for specific technical challenges.

Another aspect is that I find that I use longer lenses more often than the pictures made with them make it through edit.