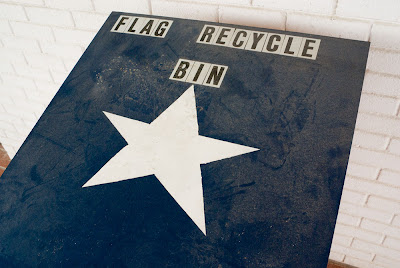 Quite Escherian! The white bricks on the right suggest a horizontal surface, viewed from above, while the white bricks to the left seem to be part of a vertical wall. What's going on?

And the very concept of flag recycling requires further exploration. How do they do it? Perhaps they unsew the stripes, launder the white parts back to blinging whiteness and reassemble? Or do they grind the old flags down to fiber, but consecrated flag fiber, before making new threads, and starting over?

Treating an old flag with respect (it's like ritual purity, which we understand here in Israel) and mixing the concept with recycling, is mind-boggling.

I believe the flags are burned with a proper honor guard.

A year ago I found a place called "Fahnensammelstelle", flag collection place >http://thepubliceyeblog.blogspot.com/2008/02/fahnensammelstelle.html<.
And I found a definition too (badly translated!): A flag consists of a rod attached to the cloth.
It represents a person or entity, as opposed to merely characterizing flag can not be replaced by a similar piece.
A flag is a highly authoritarian character, which is the origin of the technique of warfare. As an ensign, the flag used in battle as a guide. In an easily understood metaphor, they highlighted the desire to maintain the position or expand.