Printer Back in Action 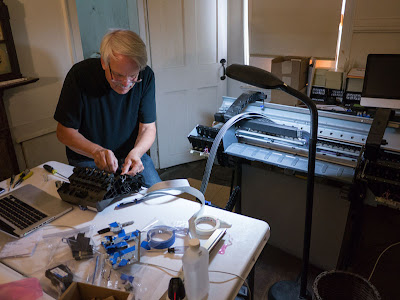 Several months ago my wonderful HP Z3200 printer began throwing little black specks all over the prints. It turned out that the drive belt for the printhead carriage was failing. Disintegrating. Not an uncommon problem, but after only three years of what has been, for a production-level machine, very light use, the belt must have been from a defective or substandard batch.

The belt is worth $38. The service call by HP to do the repair would be $1349. To reach the belt, the machine has to be completely disassembled. Right down to the chassis. My friend John has experience with these big printers, and he offered to work on the machine with me while visiting relatives nearby. So yesterday—all day yesterday—we tore down the machine, replaced the belt, and managed, with some false starts, to put it all back together again. 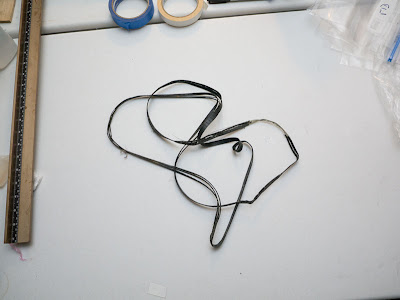 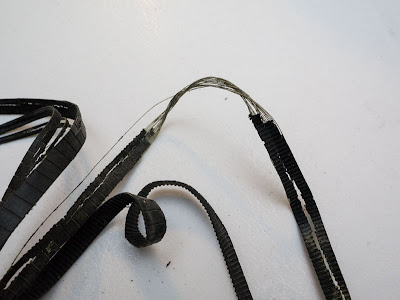 This is what a very blown drive belt looks like.


We were using an online video of the repair process, along with a downloaded service manual for a previous model of the printer. John left when we had it assembled, and I couldn't find documentation for a post-maintenance calibration test that the manual called for, so decided simply to power up the printer. When it boots, it announces that it is doing print system prep, which generally takes two or three minutes. When it had been sitting turned off for nearly two weeks because of the power failure after hurricane Sandy, the print system prep took more like twenty minutes, but worked. This time, after being shut off for three months and then completely disassembled, the print system prep went on endlessly, something like an hour and a half. But it looks as though the software in this model is capable of doing everything on autopilot. Finally, it ordered me to load paper for a head alignment check, which went just fine.

So the next step was to get out rolls of my three favorite papers and run calibration and ICC profiling procedures (the printer has it's own spectrometer and profiling system built in) on each. 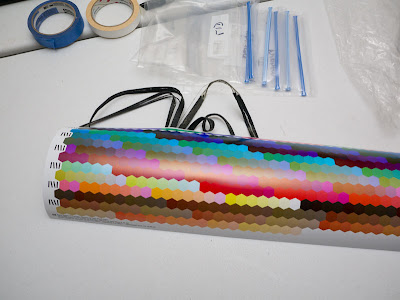 To my great relief, everything seems to be working perfectly. One problem is that the main system cooling fan—or the power supply, they're pretty much one complex contiguous unit—is making sounds that mean it's going to fail at some point. But, complex as it is, the job of replacing that unit is much simpler than doing the belt. You only have to tear down the entire left side of the machine, and I think I know enough now to be able to do that on my own.

So, next step was to call up the file for a print someone ordered earlier in the week. 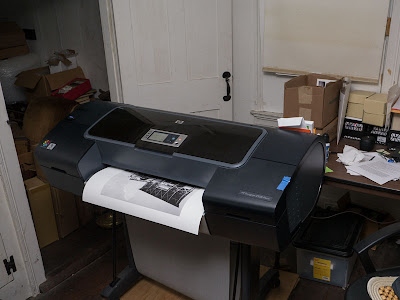 Oh, that bit of blue tape? That's holding a T15 torx screw that, well, should be somewhere in the right side pieces of the printer. I've got to use the service manual to try to figure out where it should have gone.
Posted by Carl Weese at 2:16 PM

congrats!! now you will to compare and contrast in a concise and cogent manner the differences between the hp and 3880 for digital negatives (I am wondering if the technique you use for the 3880 can be used simply replacing the yellow layer for a green layer as all the negatives from the HP I have seen have a greenish tint to them)

When I first got the HP there was a similar b&w mode, which I didn't think worked very well compared to using custom profiled color management (I find the Epson ABW is better than normal color management for monochrome printing) but even that seems to have disappeared in the current (automatically updated) software.

Anyway, I'm pleased with where I've gotten with the negatives on the Epson. The only reason to go to the hassle of testing and calibrating a second system would be to take advantage of the HP's ability to use 24" wide roll media--but I'm really not interested in making Pt/Pd prints that big.

I had a studio make me a 16x20 negative and they used the HP and roll media. They claimed the roll media did not block as much UV. However, when I got the negative, there was a band on the bottom that had lots of clear specs causing dark specs in the print. It was later explained to me by the printer that the roll had been left on the back of the machine and not used for awhile and therefore picked up lots of dust. So probably better to take the media out of the package (ie, sheet) just before you use it.

If I'm printing for several days in a row I leave the paper roll on the printer and drape a 20x24 sheet of interleaf paper off the back as a dust cover. You can't throw a plastic hood over the whole thing (as I do with the Epson) because it would block the always-on ventilation fan outlets/inlets.

The Fixxons and Picotorico packages explicitly tell you to remove one sheet at a time and then seal the package immediately.

These materials are extremely absorbent—I once put a sheet in backwards and couldn't believe the amount of ink that pooled on the impervious back side when it emerged from the printer. I think "the problem" of a good transparent material is a coating that is absorbent enough to allow strong ink density while remaining sufficiently transparent. A synonym for that much absorbency is "sticky." ;-)