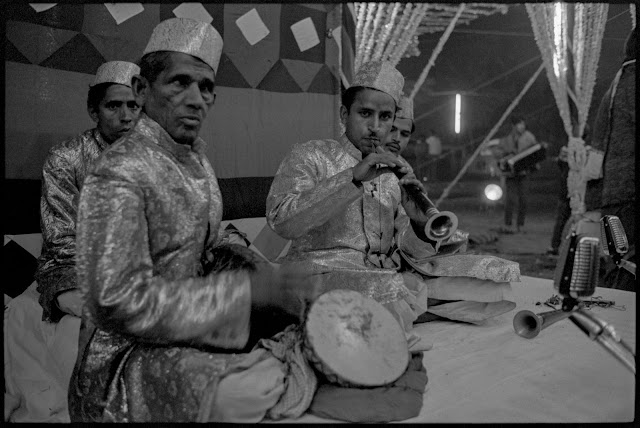 After weeks at the ashram in Pondicherry (where I got almost no photography done) the group flew up to New Delhi, where I did much better. I also got to stay with a local family which was very enjoyable.

The family consisted of a couple in their thirties with two toddler children, a grandmother, plus the husband's brother who was, I think, his business partner. He was away on business and  I got to occupy his spacious room. The wife was from the north Indian heritage who can bear a striking resemblance to Sophia Loren, and she did. For that matter, the husband reminded me of a slightly overweight Omar Sharif—quite a couple.

There were also two cooks, one Hindu, and one Muslim. The Muslim cook was there to prepare "Western Style" food, including meat, for the husband's frequent foreign visitors from his business. The only problem I ran into concerned the food from those cooks. My hosts, despite their superb English (and Hindi and Punjabi and more) could not be convinced that I would prefer to have their Hindu food. The one thing I had loved about our stay at the ashram was the simple but delicious spicy meatless food. I'm sure that their Muslim cook's mutton stews were excellent examples of the cuisine, but for someone who didn't even like beef, mutton was a strain. The thing was that my hosts had a pre-formed opinion about Americans that made them assume, no, insist, that my asking to have their meatless cuisine was simply an unnecessary excess politeness on my part and couldn't possibly be because I didn't really like meat and was very curious about the Hindu cook's food. (Twenty years later I went completely and permanently vegetarian, and now am now essentially vegan.) 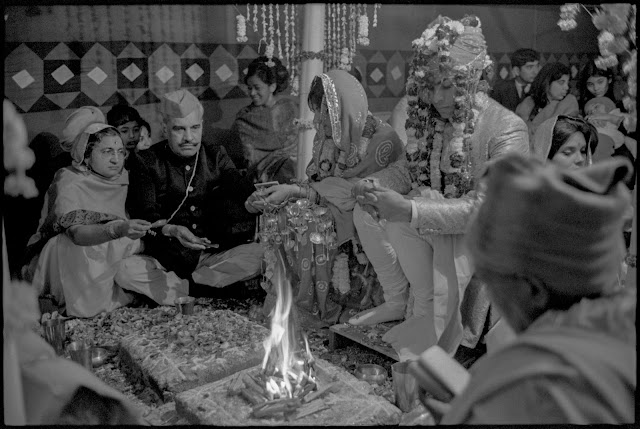 One weekday when I returned in the evening from an unusually long day of lectures and classroom activities with the group, my hosts were practically jumping up and down with excitement. They knew about my independent study project on ritual, and announced with glee that there was going to be a full-blown, over-the-top—the ritual alone will last over eight hours before the party begins!—classic Hindu wedding right around the corner! More important, Sophia, er, the wife (of course I knew and learned to pronounce their names, but fifty years later?) had already spoken with the mother of the bride (this was a surprise—Hinduism is extremely patriarchal, but unless I misunderstood something, a wedding was run by the women) who had given me complete permission to attend and photograph and spread the beauty of their culture. The only restriction was that I should be mindful of the official wedding photographer (which struck me as incredibly thoughtful) and be careful not to block his shots.

So, imagine the situation in the picture above. I've focused on the happy couple. The parents of one are in the frame on the left, the other parents are off to the right. The service is being conducted by the fellow in the lower right foreground. Now imagine small variations on this visual arrangement for eight hours. 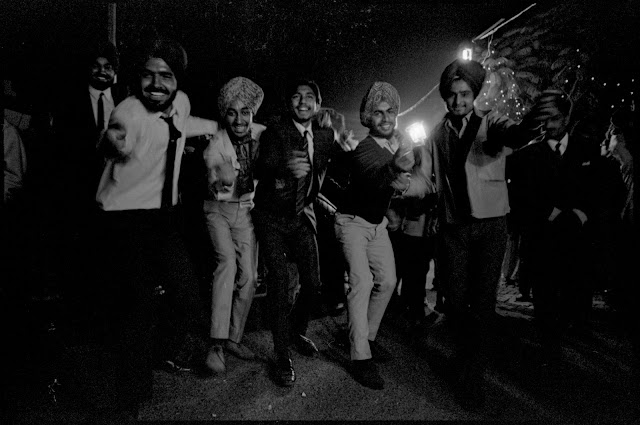 But ritual isn't always formal. An essential part of this all-day, and into the night, event was the street party. I used many more pictures of the formal marriage ritual in my academic project, but the thing that interested me most was the sense of community. Notice the Sikh turbans on these friends of the groom celebrating out in the street with dancing and firecrackers. The whole community was participating in this Hindu wedding. 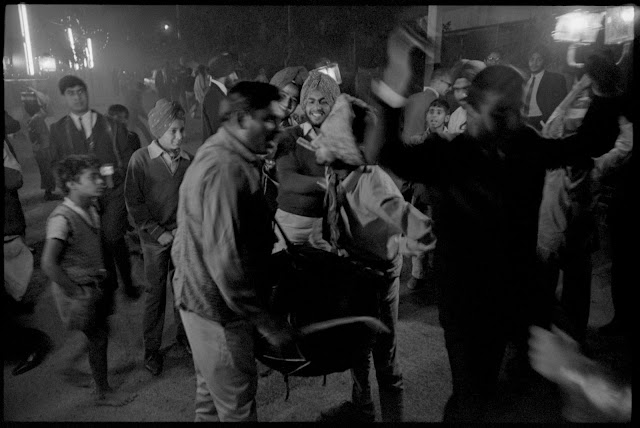 Notice in the upper left the official wedding photographer, with his potato-masher flash unit. I had been concerned that I'd have a hard time staying out of his way because, not having the faintest idea what might be about to happen, I wouldn't have a clue where the way was. It turned out that during the endless formal ceremony he was content to stay in a fixed position. I expect he knew exactly when to pay attention and get shots of specific points in the ritual. When it turned into a street party, shots of that didn't seem to be high on his agenda. 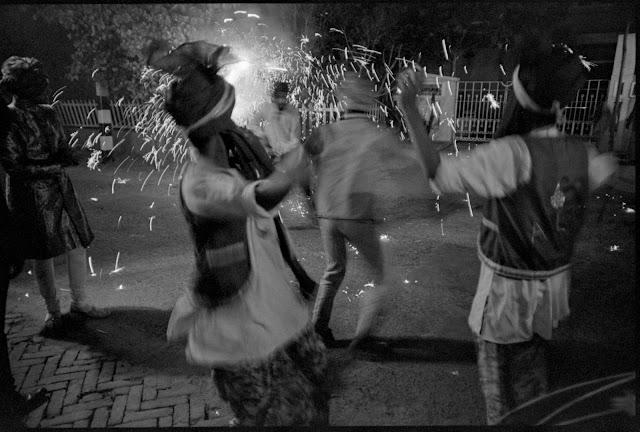 It was a wonderful privilege to be allowed into this event that was all at once religious, cultural, personal, and community-inclusive. I would never forget the experience of being there even if I hadn't been concentrated on finding pictures.
Posted by Carl Weese at 6:27 AM