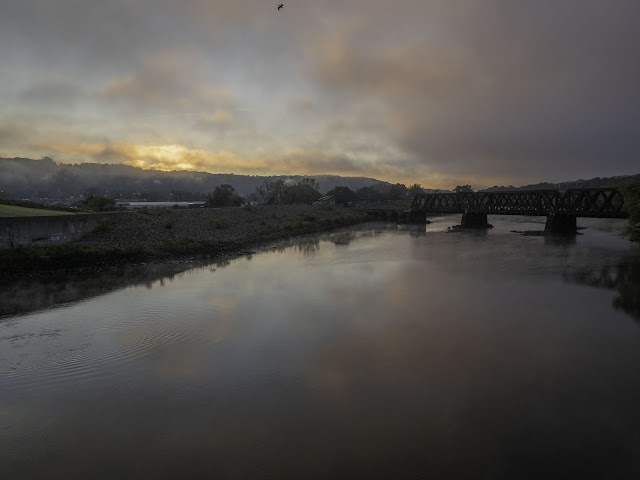 Follow up post responding to comments. There was a lot of ground fog rising from the land and the water on the road bridge between Derby and Shelton this morning. I arrived at what my weather app calls "first light" which is almost half an hour before official sunrise. For about twenty minutes it was just kind of pea soup. Then it started to get interesting with the sky and clouds and mist/fog taking on warm color. This was shot about ten minutes after sunrise, but the sun hadn't yet cleared the eastern wall of the Naugatuck valley. Everything was slightly diffused from the swirls of fog and mist but the bright spot where the sun is about to pop up worried me so I hit my custom F2 button to bring up a three-shot, one-stop auto-bracket and started it from -.66 exposure compensation. The first frame can be worked up in ACR almost as well as the giant merged DNG made with ACR's HDR function, but the merged file is smoother.

A rare event, about 15 minutes before official sunrise a young guy with a backpack walked onto the bridge and stopped about fifty feet away. Another photographer? Never happens. He extracted what looked like the world's flimsiest tripod (compared to my Leitz Tiltall, which is my light weight set of sticks) and put a digital camera on it. I began to hear beeping, and realized the guy was clever enough to be using a 10 second self-timer to trigger the camera on the toy tripod. Then a large bird flew into view and he let out a groan and called over to me that he'd missed the bird because his camera was in the self-timer sequence. I didn't tell him I'd simply pushed the TilTall head downward with my left hand to steady it and quickly triggerd two rapid fire bracket bursts. Even so I'd had a brief internal silly argument—part of me thought I should turn off the auto-bracket since you can't HDR a flying bird, and then a more reasonable part of my brain said, so what? It'll be gone. You can just use the best bracket. I've got two shots with the bird that I rather like. Click on the picture to get a much better view of the scene with a cormorant on the wing.