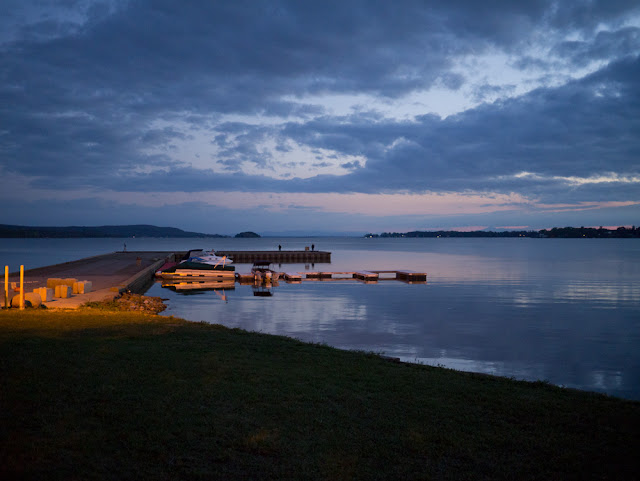 St. Albans, Vermont
Around eight last Friday evening. Lake Champlain was calm, but on the local news they were talking about the possibility of severe erosion damage to the shoreline and islands. Until last night, back home, we had only a battery radio as a source of news, with the power out and the roads closed because of storm damage.

There was some flood damage in Connecticut from Irene, especially along the southern coast, but the vast power blackout was mainly caused by tree damage to power lines. In many parts of Vermont where we've recently been working, looking for agricultural landscape material, the flood damage is devastating. Whole towns are nearly wiped away, along with the roads that serve them. Also the towns in and around the Adirondack park where I've done a lot of work in the past few years. A lot of the places where I've photographed and that Tina has painted are going to be irrevocably changed by the storm.
Posted by Carl Weese at 6:07 AM

Email ThisBlogThis!Share to TwitterShare to FacebookShare to Pinterest
Labels: behind the scenes, weather

glad to see you back online...

Glad to know that you have come through the storm without damage. Takes loss of power to realize how dependent we have become on electricity. Glad you are back.

How did you get back from western VT to the middle of CT? It looked from one web map of road damage as if all the roads through the center of VT were cut.

Scott, our little excursion was for Friday and Saturday. The sky got weird, and not much good for pictures, by noon Saturday so we were home in the early evening. The storm didn't come in until hours later, and also took the unexpected turn straight north where it caused so much river flood damage in the Adirondacks and Vermont.