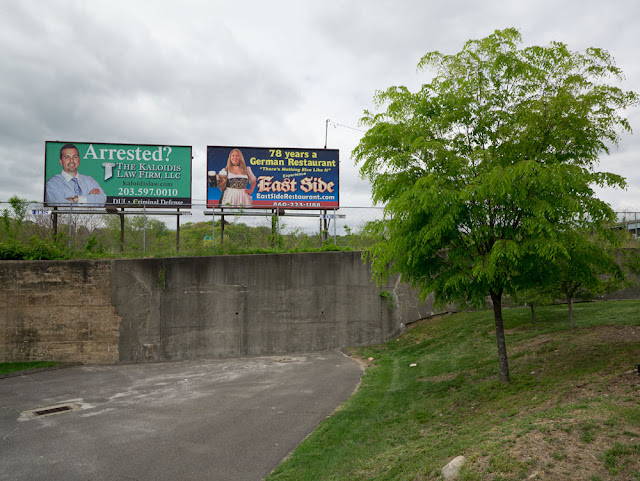 And of course now you know how I look like.
;-)

Carl, the curve of the road and the little edge-fence on the lawn to the right suggests that the road turns right and slopes away from us. Or is it just a very abrupt dead end? There are all sorts of conflicting cues in this picture, even before you get to resolving the legal issues and wondering how they relate to sauerkraut and wursts. So Waterbury can be just as weird as Manhattan!

Martina, I don't think so..

Scott, at lower left is a parking lot, the concrete wall is a support for a north/south railroad line directly past the cyclone fence. The whole area is relatively new, revised, terrain because Waterbury is a place they "flew" a giant Interstate Highway (I-84) directly through the center of the city, a hundred or more feet in the air. Even decades later, the reworked commercial and residential districts and the re-routed surface roads still look raw and out of place in a small city built mostly a century or more earlier.

Carl - you are right! I look totally different ;-)

However. In Germany until 1997 the code of conduct for lawyers prohibited advertising. And even nowadays you don't see that many ads. Never billboards and the like.

So I am not sure which one of the two billboards is more exotic to me.
Strange combination, yes.

Certainly this sort of advertising by attorneys didn't exist in the dark ages when I was young. I first noticed it about twenty years ago when they suddenly began buying the full page advertisement on the back cover of the phone book. Often, featuring a picture of an ambulance! Since "ambulance chaser" is an intensely derogatory term for lawyers, I really wondered who they were hiring for advertising advice...