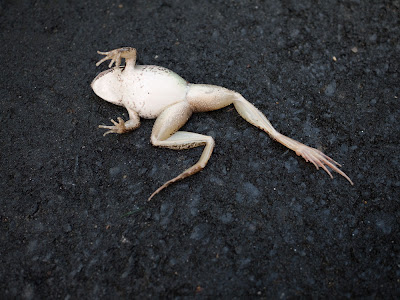 Is it strange when I say the photo is nicely composed and the contrast between flesh and tar is good?

In the brief text included in William Eggleston's "Democratic Forest," Wild Bill explains the title. He tells the interviewer that he walked into a bar at the end of the day (as usual) and a friend called out, hey, Eggleston, what have you been photographing today? And he replied, I've been photographing democratically. Meaning, every subject, literally everything you can find and see, has the potential to become a photograph, if you can just figure out how.

So the formal concerns that turn an observation into a successful photograph can be applied to ANY subject if we are just clever enough to make it work.

BTW, you must listen to Doc Watson's version of the song--easily found on the intertubes.

I take it this would fall into the "still life" category.

I didn't find the Doc Watson version (European intertubes might differ, ;-)) but the Muppets' version ;-)