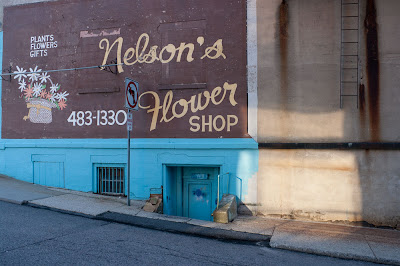 Incidentally, all the little walls, railings, signs, paint markings that glom into or poke out of your pictures' more urban interstices and angles, seem to me quite close to your repeating weeds-and-walls motif. An arrangement of pure planes (not so much objects), enriched by some strange intruder from the messy real world.

In my 20s I loved to find abstracted patterns, the more immaterial the better - so would have tried to edit out these interlopers; but with time, I find I now prefer what is specific and graspable and the outfit just isn't the same without these (awkward) members.

Interesting...I also have moved toward more and more complex pictures. As a kid I listened to the advice to "simplify, simplify" and then as a working professional the goal was to keep the pictures on message and eliminate the extraneous. But in my personal work I began to realize that when I saw something I wanted to photograph, I wanted to get "all of it" and not at all to simplify.

Uuuuh, you were very busy while I was away and now I try to catch up ... .

I wonder if this photo would work so well without the square of sun light on the wall - I think without it the atmosphere would change totally, more to the gloomy side.

With me it is the other way round - the older I get, the more photos I take, the more I try to simplify things. Not that I am any good with this, ;-) - most of the times I find my attempts simply (sic!) boring.

Martina, I agree, the patch of light is essential. It's why I stopped and made the picture this time, instead of looking at the interesting wall and moving on, as I've done several times before. (This wasn't my first visit to Malone.)

When teaching I sometimes talk about recognizing "90% of a picture" because when you find that, if you stick around, the other 10% sometimes magically appears. In this case, I'd noted this subject as 90% of a picture on several previous occasions, and it was the patch of early morning sunlight that brought in the missing 10%. It was also important that there was a light cloud cover, just thicker than haze. This opened the shaded area and softened the patch of sun so everything was in easy range of the sensor. With a clear blue sky and clear sunlight at the same hour, the effect would have been harsh and brilliant to the eye, and impossible to capture without negative film.