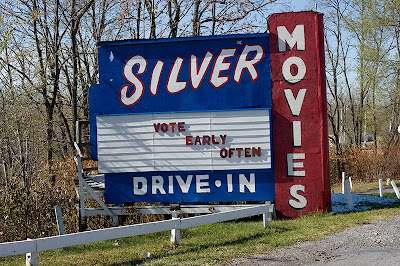 A classic theater like The Silver Drive-in near Johnstown, PA, might as well keep up the old traditions in other ways as well. I grew up in New Jersey, straight west from New York City. About halfway in between was Jersey City, NJ, a municipality famous for its political and economic...eccentricities. These included having more than one mayor carry out his duties and win re-election while behind bars. At election time my father always kept repeating, "Well, as they say in Jersey City, vote early and often!"
Posted by Carl Weese at 6:00 AM

I was looking on your web site to see if you had a pt/pd print of the screen/site from this DI. Have you published any?....lyle

This was my first time there, and I did 8x10 of the marquee. I found six DIs on this trip that I hadn't gotten to before.