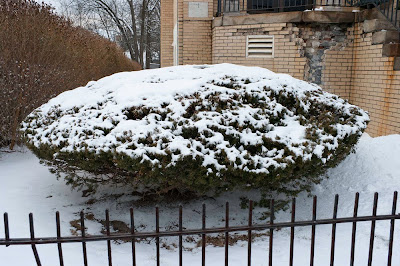 Carl, that #2 is it for me: a wonderful combination of a neatly trimmed Taxus? shrub, snow covered to reveal the form even better and set against a similarly coloured background, which partially turns out to be a damaged wall. And now sensitized for discrepancies, of course the fence in the foreground gets noticed, too. A fine, slow image.

Thanks, Markus. This, btw, is not a Ruin: it's an active church that clearly is in a tight financial condition. It's a Catholic church of the Maronite sect if I recall correctly. Quite unusual around here.

This diversity of congregations is something you usually don't find here in Europe: Dominated by Roman Catholics and Lutherans, I know of only two evangelical free churches - prayer rooms more or less - and a small islamic center with a prayer room. And as those "independent" churches don't benefit from the state collecting taxes for them, their state as well is dependent on the financial power of their members.

I thought the somewhat rotted snow on the mushroom-shaped bush related nicely to the crumbling corner of the yellow brick bulding (nothing suggested that it was a church), and perhaps the snaggle-toothed fence is connected somehow. A very intriguing picture.

Markus, yes, very different. There are an enormous number of protestant sects. Roman Catholics may still be the single largest group, but all the protestants together are much larger. Orthodox churches are quite rare, and a Maronite rite church like this one is really unusual to find. Of course synagogues are everywhere. In many towns you get the impression that churches constitute the largest class of non-residential buildings!

Of course there is famously no official church here, but there is very substantial tax subsidy because any entity that establishes an identity as a church gets massive tax breaks. Priests and pastors have to pay income taxes, but the churches pay no property tax. When you see how much valuable property is owned by all these churches, you realize that every citizen is heavily subsidizing all the churches. There are also many ways that churches get to channel public funds into their own charitable work and of course some of these raise controversy.