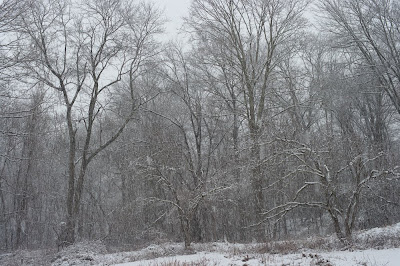 Email ThisBlogThis!Share to TwitterShare to FacebookShare to Pinterest
Labels: weather

Somehow your snow series reminds me of the last weeks here in Mainz - deja vu!
Question is: is this usual for your area or as unusual as long lasting snow is in Mainz?
Funnily, now it is the typical Mainz' weather: rain rain rain. And my captcha for this comment is "regen" (i. e. German for rain).

In fact we've had less snow than usual this year with a series of "dustings" like this. We've only had three snowfalls of 6" or so, and none deeper than that, which is much less than usual. It's been warmer than usual except for two different week-long cold spells. We've had lots of periods with the temperature just above freezing, which would be more typical of winter down in Philadelphia. I actually find that more unpleasant outdoors than when it's well below freezing, nice and crisp and dry.

Carl, Philadelphia would have been more to your liking, this winter. Delaware, Md, and Washington had several record snowfalls. And since they don't own much snow removal equipment down there, it stays for a while, the schools and offices stay closed. They will remember this winter for years to come.

... while we had our first "summer thunderstorm" today with thunder and lightning - I can't recall this ever happening as early as February - after some real cold snowy unusual winter weeks. But hey, perhaps it is just my narrow time frame of experience with climate, ;-).

Scott, we spent several years in the Philadelphia area in the early 70s and I really couldn't stand the winter weather which was consistently mid-thirties (F) and drizzling. But this year a friend in the far southwestern edge of Virginia has had successive snowfalls measured in feet, which is nearly unheard of there. She's spent many days snowed in at her farmhouse, unable to clear the two-mile driveway...

Meanwhile a series of storms have hit New York and New Jersey, or farther up in New England, leaving us with just a few inches to push around.