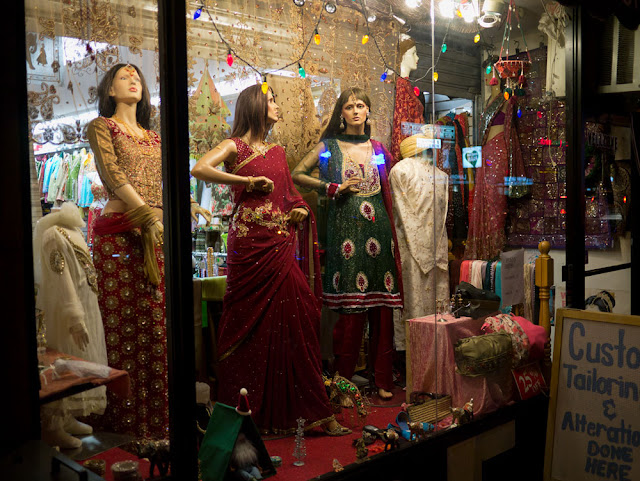 New York, New York
When I'm on the road, working out of my car, I almost never eat in restaurants, as I've mentioned in some posts during my September road trip. But then, when I'm doing that, I'm not in New York City. Around a long corner from CAP there's a cluster of Indian and Pakistani eateries, and all sorts of other ethnic-themed businesses. I'm a little embarrassed to admit that the only one I can recommend is Tiffen Walla, on 28th between Park and Lex. Thing is, I like it so much I haven't tried any of the other nearby places because that would mean, well, not going there. It has an all-vegetarian menu (in the Indian manner, which uses dairy, so it's not vegan) and it's a pleasure to a vegetarian to be able to just order with abandon from a menu I don't understand, without having to figure out which dishes might be meatless, and knowing from experience that anything I order will be wonderful, and just amazingly inexpensive considering we're talking about a restaurant in Manhattan. I always go there on Friday of workshop weekends after meeting with my teaching assistant to set up the facility for the class.

After my curry or dosa, I pull out my small digital camera and begin my walk to a waiting sofa-bed generously made available by friends with an apartment in the lower 90s near Third Ave. About three and a half miles of walking in the halting, stop and start, jittery activity that is locomotion in NYC. With, sometimes, a picture to try for almost anywhere you look. This past weekend, which is several weeks later than the winter workshop I did last year, I learned yet another thing (it never stops, we never know enough) about light. Those three weeks or so made a critical difference and I found far fewer situations where the evening light was something I could work with. It was just too dark, in the sense of not enough supportive, surrounding, light to make pictures that weren't just a few highlights surrounded by black. I know, people have made that a trademark style, but I don't like it. So I have only a few interesting pictures from the weekend.

I thought that the workshop itself went very well. An unusually receptive group—not one of six students had any problem learning the potentially challenging skill of brush coating the Pt/Pd solution onto the paper—and they produced a prodigious number of prints. Some of the prints were good, and all of them offered learning experience.
Posted by Carl Weese at 6:00 AM

Email ThisBlogThis!Share to TwitterShare to FacebookShare to Pinterest
Labels: behind the scenes, shop windows

Carl, another good place in the 'hood is Dhaba on 28th and Lex. They do serve meat, but have a vegetarian and a vegan menu as well. Food is very good.