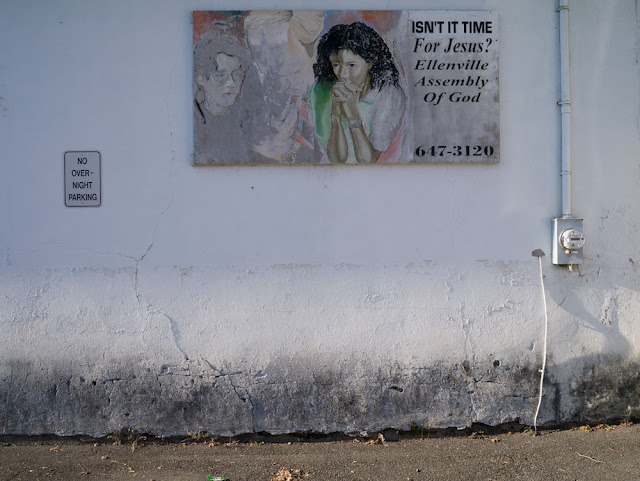 Ellenville, New York
Posted by Carl Weese at 6:40 AM

Guess they'll have to park in a barn!

Also, I notice the lack of area code on the phone number. So, to what extent is this a genuine outreach, or just advertising for a church? Even if you live in town, and have a cell phone, and want to talk, you have to give the thing the area code first in order to place the call. If you are desperate and have found a working pay phone, and have quarters to put in the phone, or have bought a card at a convenience store...you will not get your call through unless you are together enough to know the local area code (which has changed because of the proliferation of numbers/accounts with the explosion of cell phones). You don't have the complete number. They aren't making it as easy as it needs to be to help someone in trouble who somehow encounters this sign and thinks it offers help.

I just love the range of tone in this image, with small hints of green top and bottom. Was there anything special in exposure/processing or is this straight raw from the Lumix? by the way, the number is (over-)647-3120

Lyle, nothing special. Because there was so much light material I took out my normal or default -.3 exposure compensation. In ACR for the screen version all I did was put in a little Recovery (16) and a fairly strong amount of Brightess (85) which enhanced separation of the middle values. To print, I'd add 20 points of Fill Light and probably move Brightness a little higher.

So, not "out of the camera" but only modest adjustments. It was the Lumix G3 with 20mm lens.