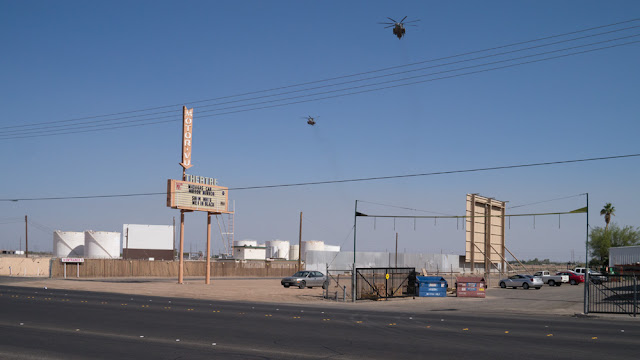 I thought I had arrived at the Motor Vu theater in Imperial (as in Imperial Valley, the desert where they grow iceberg lettuce with irrigation water) California at the perfect time for the late afternoon sunlight on the venue and its surrounding tank farm. Then as I got out of the car I had to run to my anticipated camera position to arrive in time to capture what I presume are Border Patrol choppers (look at a map) but I have no idea why they were lining directly over the theater, or what they thought of my taking pictures of them. At that altitude they totally saw me. I finished with a lot of other views, all digital, no tripod, and got the hell out of there before anyone arrived to ask what I was doing. The HHR's computer blandly told me it was 113°.

There's a strange smell here, as though something is cooking. Of course, that would be everything.
Posted by Carl Weese at 9:42 PM

Bing Maps shows that those helicopters were on short final for runway 32 at the Imperial County Airport.
http://binged.it/KCu5Ne