Carved Aspens and the Ride Home 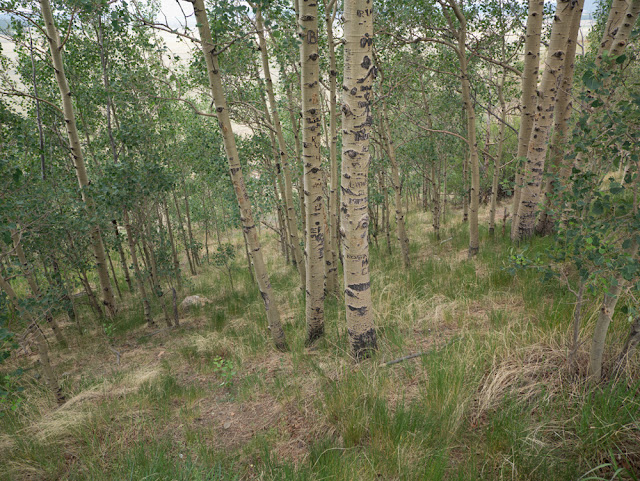 Scott asked about the last days of the trip. The Comanche filled the "missing link" needed for the core project—a theater set in the mountains. Several interesting theaters in Idaho, Utah, and Colorado didn't quite do this because they were surrounded by hills, not mountains, or there were mountains but too far away for the sense of immediacy I wanted. Once I had the Comanche, the next order of business was to get away from the rapidly spreading wildfires. I'd gotten to Buena Vista on spectacular roads (routes 50, 25, 285) that included crossing the Monarch Mountain pass at 11,312 feet. So Wednesday I continued along the mountain passes on route 285, which turned out not only to be the most direct route to the Denver area, but also threaded a line between the fires raging above around Fort Collins and below around Colorado Springs. The picture above was made at a roadside pullout at a mere 6,000 or 7,000 feet elevation. 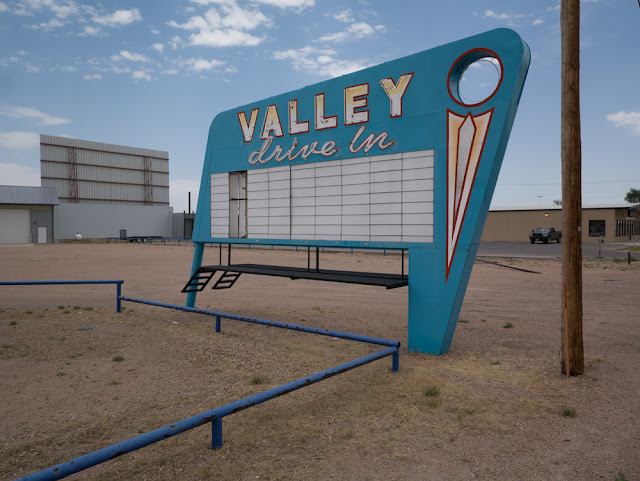 From Denver I took I-76, stopping at Fort Morgan where The Valley drive-in had recently been closed, with For Sale signs on the fence and gates. From the look of it, this single-screen venue's owners have decided to cash in on the land rather than invest in the digital projection conversion. The area seems to be expanding and the financial equation is probably quite stark. 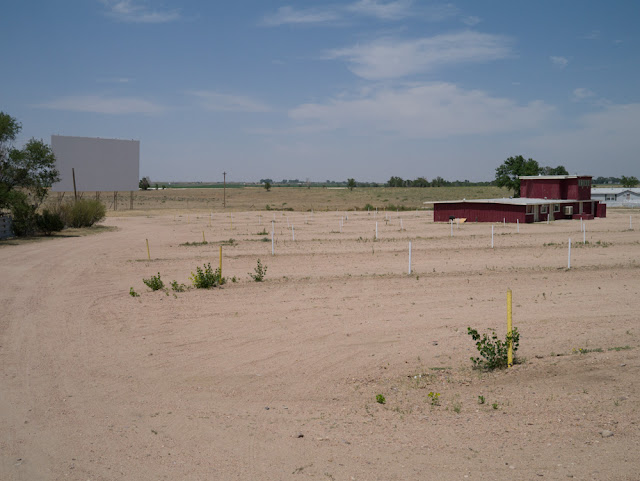 From there I went to Sterling, CO, where The Starlite is still hanging on, showing films from a couple months back, weekends only, on just one of its two screens. The field for the other has been taken by self-storage buildings. I couldn't make contact with anyone, but suspect that will be the fate of the rest of the field by next year. It's hard to imagine this venue managing the six-figure cost of going digital. I found this theater somehow more emotionally resonant than just about any other I've visited, and spent quite a while shooting extensive coverage of it in digital capture. The wind was too strong to make it practical to do anything with the large format cameras, but I found myself visualizing a suite of perhaps six or eight small color prints.

Back in 2002 I photographed three of the two remaining drive-in theaters in Nebraska, so I used I-80 to get as far as Lexington, NE, where I managed to get a room after failing to find anything a couple of towns earlier. Thursday was basically cruise control at 75 mph, except for a relentless succession of construction delays or speed restrictions. After stopping for lunch with a friend in Lincoln, NE, I followed I-80 across Iowa and into Illinois, ending up at eight o'clock in the evening at the home of a  friend in Earlville. 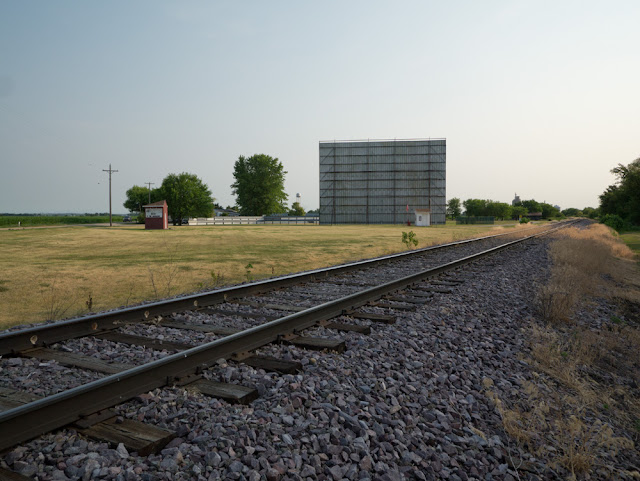 In the morning we went to the nearby Earlville drive-in theater and then I continued east, hoping to stay in front of the massive storm system heading in the same direction. I finished the day at Barkeyville, PA. Saturday, MapQuest showed seven hours of road time needed to get home, so I thought I'd do some off-topic shooting and stopped in Clarion, and then Bellefonte, PA. But I found I was really too tired to concentrate and decided to simply line out east, getting back to Woodbury a little before five o'clock. This turned out to be just in time to go up to Washington, CT, for the opening reception of a show by the wonderful painter Charles Cajori. I even managed to stay awake.
Posted by Carl Weese at 1:22 PM

Email ThisBlogThis!Share to TwitterShare to FacebookShare to Pinterest
Labels: behind the scenes, drive-in theaters, roads, weather

The Valley looks in really good repair, better than some of the others that are still in biz. Earlville: railroad and drive-in, about as American as you can get!

Glad you got your shots in Earlville and that you got out before the storm hit. Too bad the Union Pacific couldn't supply a locomotive and a few freight cars for this shot but it turned out great anyway. How did the image taken from the opposite direction turn out?

Tom, the Earlville was really productive. There are several nice things. I grabbed that one almost at random for the blog post.

Lyle, The Valley looked like a "new build" to me, and a little digging around indicates it was only open for 11 years. The owners have a four-screen hardtop theater in town. There's a surprising economic sidelight about the DI theater business model. Most are shoestring operations run by dedicated fans of the DI culture. But sometimes a bigger corporation will buy or even build from scratch to use a drive-in theater as a "place holder" on a commercial real estate investment. If you've got the capital and think a piece of land is going to soar in value over, say, ten years, you put in minimal facilities (won't really be possible once digital projection is mandatory) and hire a manager. The theater doesn't have to make a profit. If it brings in enough to pay the staff and the property taxes, then it "carries" your land investment without further demands on your capital. If you suddenly need to buy a $96,000 digital projector and spend another $15,000 to dust-seal and climate-control your projection building, you might decide to bail out instead.