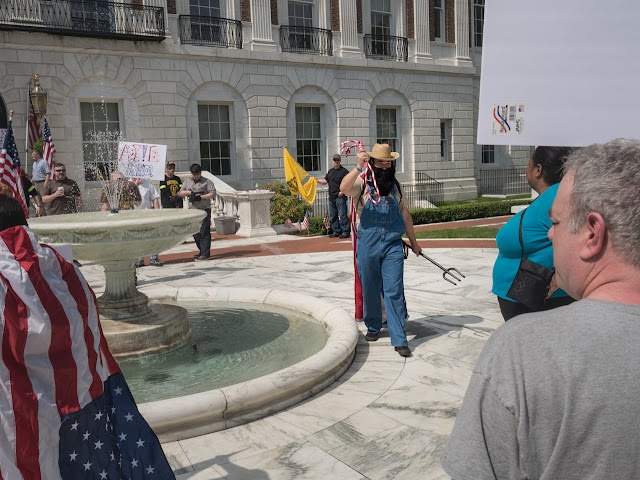 Act for America, which staged rallies across the country this past Saturday, is cited by the Southern Poverty Law Center as a hate group. But they seem to be working on their image. Signs and speeches during their Waterbury event emphasized the way Sharia law (as they misinterpret it) is vicious to women and gays. It was almost as though they were trying to be politically correct, at least part way. They also were prepared to put this into action.

After making the paranoid announcement that at the end of the rally nobody should leave alone, but only in groups for safety (!?!) a speaker also said that if anyone showed up with signs or speech advocating violence they should be immediately surrounded by people with "not with us" placards. There were so few people in the large courtyard that surrounding anyone seemed problematic.

Then a guy showed up wearing farmer-johns, an American flag cape, hat, huge false beard, yelling "where's Sharia? Let's get 'im!" Attendees immediately confronted him (I overheard "get that shit outta here you asshole") while others ran to alert the cops, who were for the most part staying on the street side of the crowd barriers. The guy was carrying a plastic trident and a noose, weirdly made from narrow-gauge red and white plastic rope. From what I could gather, by the time the police confronted him one of the demonstrators had complained that he had bumped or shoved her. Whether it was that or just the noose, something was enough for the cops to take him away in cuffs. 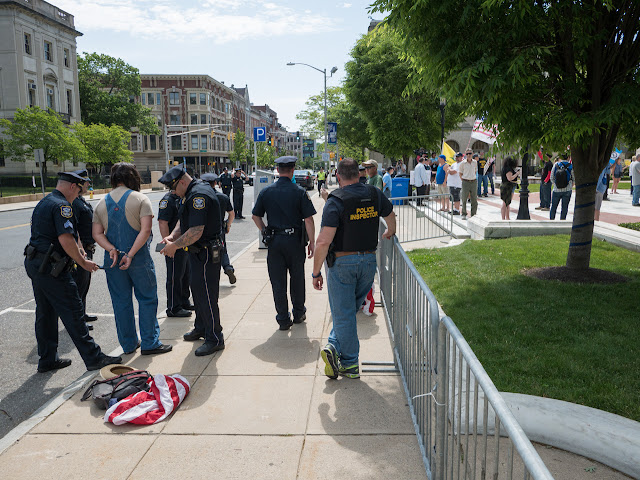 Strange things you are reporting here, Carl... Is there a possibility that he might have been a provocateur?

Markus, yes, it's possible he was trolling or mocking the group. Wasn't my impression at the time, but could be so.