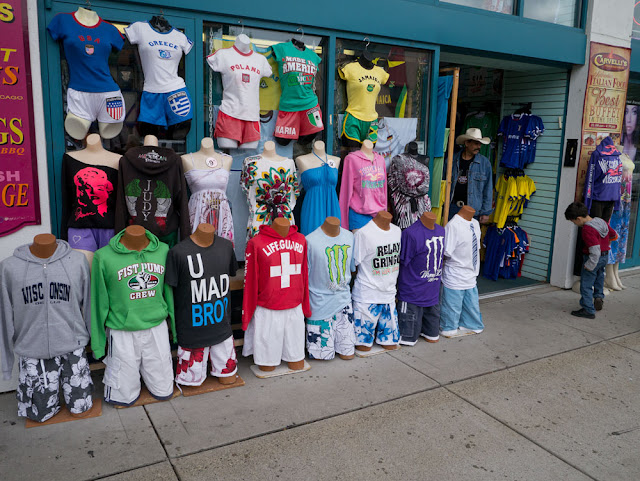 Wisconsin Dells, Wisconsin
I spent a lot of time at the Wisconsin Dells "Big Sky" drive-in theater, about two miles out of town, which in the midwest means you're in the middle of a bunch of corn fields in active production, trying to get something good from it on large format film. Spectacular siting, not easy to deal with. Not sure how well I succeeded.

Then I found the town center of Wisconsin Dells, which I'd heard of. I was really quite amazed. "Sleezy/tacky and damn proud to be that way" would seem to be the motto. There's a place near the foot of Lake Placid, in NY, that is similar, but no competition to this. Then there's the town that contains Dollywood which had before astonished me as, oh well, exemplar of bad taste.

I thought that I'd get Tina a T-shirt to wear to the gym. That's a standard thing I do on these trips, sometimes I'll pay too much because it's something cool from a state park and the overage is a donation, but this time, I tried to find a shirt that actually had a funny thing on it, and was instead struck by how gross they were. The worst cotton I've ever felt. It wouldn't matter how cheap the joke T-shirt might be, it wasn't worth buying.
Posted by Carl Weese at 6:00 AM

Carl, you have caught the essence of the Wisconsin Dells in both photo and words. Spent undergraduate days in Wisc and went to dances in the Dells. Beyond all the tourist sleeze was an interesting geographic area.

Martina, the one I would have gotten if the fabric weren't so horrible was, "Relax, Gringo, I'm here legally." BTW, a surprising portion of the tourists appeared to be Hispanic, and a lot of the stores were clearly catering to that market so it was no fluke. I almost did buy one of those, despite the bad quality, to send to my friend Angel Franco (one of the most senior photographers at the NYT). He'd have a ball walking around the Times offices in it.