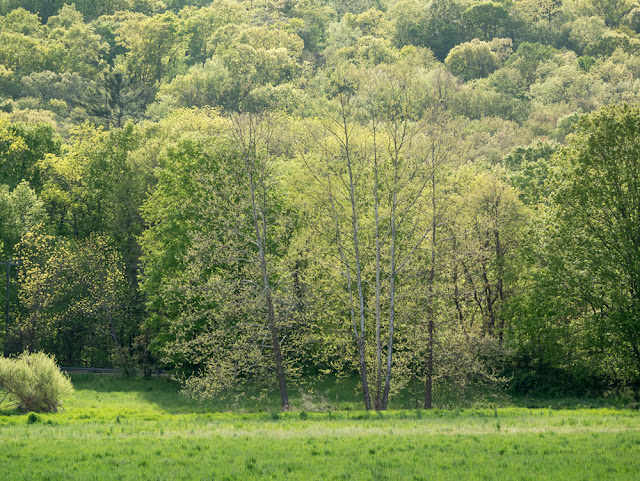 On a technical note, at 100% view the detail in the bark of the triple group of trees and the definition of the small leaves is quite remarkable. The Lumix vario 45-200 was at 91mm, so equivalent to about 180 on 24x36, aperture at f/7.1 which seems to be optimum with a number of my lenses for m4/3s. The G3 was on my trusty old (30+years) Gitzo R4 tripod. I framed the picture using the EVF, then switched to the LCD so I could use touch focus. AF on a tripod used to be problematic, but with this feature all I had to do was touch the LCD exactly at the triple tree trunks and the camera put a single, fairly broad, AF patch right there. Touch the shutter release set to 2-second self-timer. I made a string of exposures because wind was blowing the leaves around and changing the pattern of distribution across the frame. The trees are crisp in every one.

Digital stuff can be frustrating. My big HP Z3200 is in deep do-do, after just three years. The main belt that drives the printheads is shedding its rubbery coating, making printing impossible. On-site service is required. HP wants $1,349 to replace the $60 belt. An independent firm wants a flat rate of $995 plus parts. And the main power supply is making bad noises that go away after several restarts (this is an always-on, self-maintaining unit). Online research shows that these are common weak points in the printer's design, though having them show up after barely more than three years is at the bad end of the luck curve. It's a wonderful printer capable of making the best digital prints I've ever seen, plus it's extremely fast and uses vastly less ink than the Epson 4800 it replaced, or my new Epson 3880. But if it needs $1,500-1,800 in repairs after a little over three years, that's one serious fly in the ointment. Anyone know of a good, reliable HP photo Designjet service person who can cover western Connecticut? For a professional printer in a home office?—one place I contacted said their insurance coverage doesn't allow them to enter non-commercial premises, even a professional home office. WTF?

But. While I haven't done it yet, too busy with the digital negative tests, my examination of this picture tells me it would make a wonderful large print. In fact, it would easily rival large prints of pictures in a similar style that I made in the color darkroom from color negative film with my Hasselblad and 250mm Sonnar. That's astonishing, and not just because it's coming from a 4/3s size sensor. The G3 at introduction cost something like $650, available now on close-out for a song, and the lens currently sells at $269. I suspect that a new copy of my Gitzo tripod and head would cost substantially more. That's amazing.
Posted by Carl Weese at 5:10 PM

Email ThisBlogThis!Share to TwitterShare to FacebookShare to Pinterest
Labels: behind the scenes, rural scene, seasons

Having just gone thru this exercise, a decent, 3-way tilt head will start around $200. A series 3 aluminum Gitzo will cost you at the high end of $400, if you go fiber, figure $600. Gitzo seems to be putting all their energy into the 'Systematic' line which are legs that you can switch out the tripod head plate, center column, etc, ie, customize it to the working conditions. They run another couple hundred more. Yes, the tripod with head will be much more expensive - so keep you old Gitzo! And yes, I bought a new tripod because a 4/3 on top of big wooden legs and a Ries head meant for a 8x10 seemed a little much!

On the subject of tripods for miniature cameras, I retired my Gitzo and Majestic platforms to the closet. Now, when I require a tripod, I use a Tilt-all (from Adorama, $114) with a Calumet large ball head with quick release ($77). Solid, excellent range and flexibility.

However, I find myself needing a tripod far less frequently with digital cameras (with shake reduction) and the virtual darkroom (image realignment, etc.) Even multi-frame panoramas can be done hand-held.

What a wonderful world!

Tyler, I have a Till-tall also, almost as old as the Gitzo, and I use it with digital capture cameras. But the platform interferes with the zoom ring of that particular lens. The spring-loaded mounting screw (as with Ries) is so fast, it never occurred to me to mount the quick release on it...that would solve the interference.