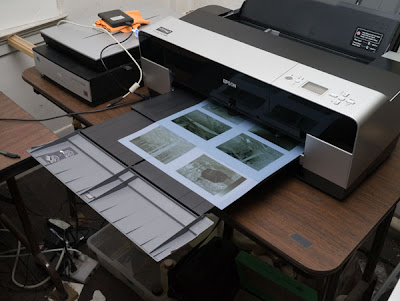 A sheet of 13x19" Pictorico® OHP Film emerging from the printer. There are eight approximately 4x5" negatives ganged up on it. 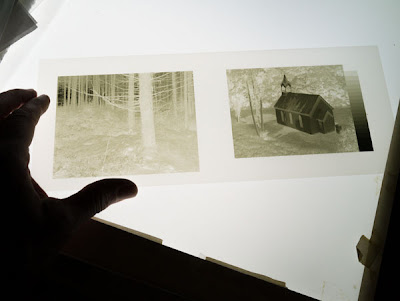 The black and yellow inks in the Epson K3 set are known to be the best UV absorbers, so the print driver has been set to maximize use of those inks. The result is remarkably similar, viewed by visible light, to the appearance of ordinary film negatives that have been developed in a staining pyro formula. The pyro stain is a UV blocker and is proportional to the main silver image. Something very similar is going on here. 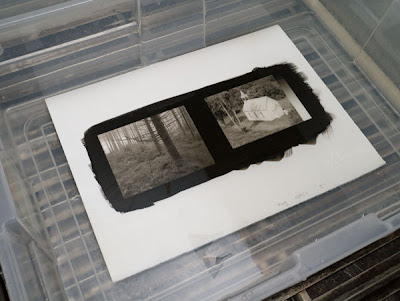 Printed at the standard exposure time determined by test exposures of the step tablet, things look promising in the clearing bath. 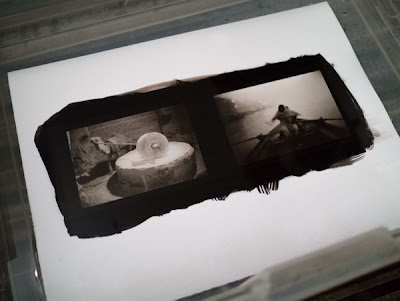 Another of the small test pairs, this time two pictures made in Iran and India back in 1969/70, never before printed in platinum.
Posted by Carl Weese at 4:09 PM

Email ThisBlogThis!Share to TwitterShare to FacebookShare to Pinterest
Labels: behind the scenes, platinum/palladium

Being a chemist/scientist by trade, I'm fascinated by your testing. I'm enjoying these recent posts. Lots of chemistry going on here.

Don't know whose process you're using (maybe your own!) but there's a very interesting article that just arrived in the new PT. Photoshop scripts etc. I'm still printing on the new Revere Magnani platinum using curve I made with Mark Nelson's PDN process. And still using same chemistry you taught me!

Ed, the Pt/Pd chemistry was figured out in the 1870s and hasn't changed all that much. There's lots of chemistry in the inkjet technology, but it's all under the hood. I'm just slogging away at simple empirical testing to get the two media to play nice together.

John, as usual, I've read everything I can find, thought about it a lot, and am now trying to use all the good stuff while ignoring all the idiocy. Seems to more or less be working. Back into the lab...