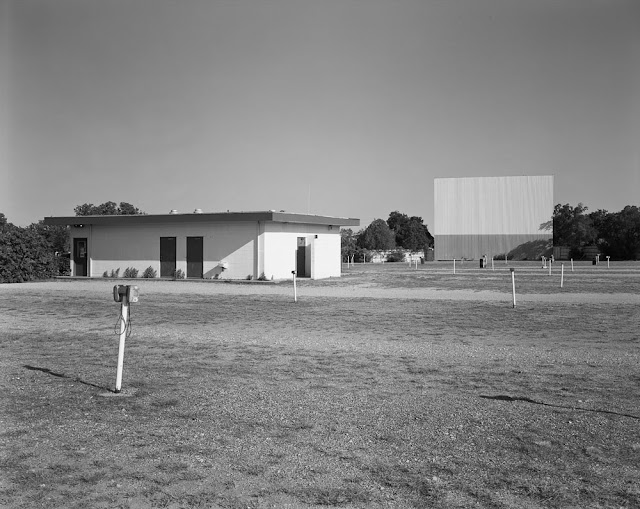 I spent most of yesterday scanning. I avoided working from the negatives made on the Western Loop of the Giant Road Trip last year, scanning only the few that I needed for the upper-level Kickstarter Rewards choices, because of the mold in the scanner. With the scanner cleaned up, I've been working on all my 8x10 inch film from the trip.

The Screen at the Graham theater is heavily corrugated metal and has a rather severe ripple in the surface, which drove my digital cameras nuts. Oddly, seeming defects like this don't show up at all in projection. It's amazing what our vision tolerates viewing a projected moving picture. But something about the surface of this screen and the distance between it and the best camera positions made for monster moiré in almost every frame. Rainbow color arcs across the screen—something I've never seen before or since. If the distance had been greater or less, if the cameras had 12 or 24 megapixels instead of 16, the perfectly matched interference problem between the corrugations and the sensor pixels would have been mitigated, but that wasn't to be. It was after this I began using intentionally induced diffraction to minimize moiré without losing too much definition when working with expanses of corrugated metal. I'm glad to have several 8x10 film negatives. The .jpg file displayed here may appear to have moiré, depending on viewing size, but the scanned file itself shows nothing but clearly resolved subject matter. 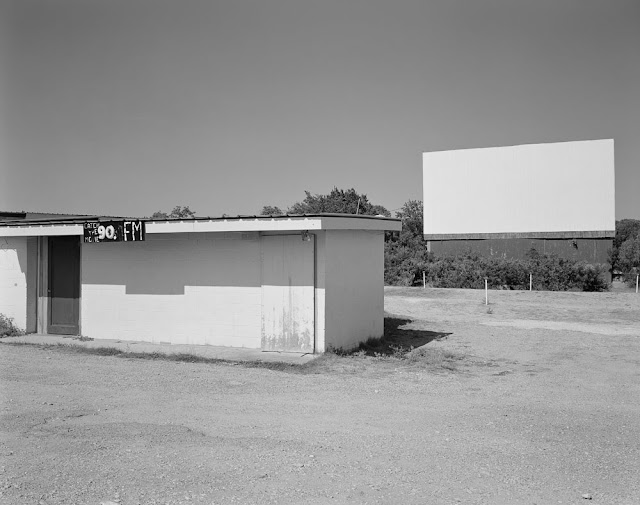 This drive-in is about as simple as it gets, although in fact it is paired with an indoor theater and also a rare indoor seating area with a picture window view to the outdoor screen. Something about it also really says, "Texas," to me. Plus, I had a wonderful interview with the owner and got some nice portraits of him. The digital captures from here are fine, but there's something about all these broad expanses of smooth tone that will benefit from all the data taken in by large format film.

While continuing to develop one set of negatives from The Southern Loop early every morning, the next task is to work on the 7x17 negatives from The Western Loop. Not looking forward to that. My tabloid-size scanner is out of commission. Interesting how the wonderful tools that introduce us to the joys of digital imaging have service lives a fraction the length our old tools allowed us. The panoramas from the Korona camera have to be scanned in two pieces (making sure all scanner settings are identical for the two halves), then flipped and rotated all over the place before being joined with Photomerge. Nothing difficult about any of it, but it takes a good, and boring, 15-20 minutes just to come up with a basic merged acquire for each picture, even at a modest resolution capable of just slightly enlarged prints. I may use an old trick, and instead of stalwartly doing this for each of the scores of negatives, put each one on a 24" slide-viewing lightbox and snap them with a digital camera. Acquire time becomes about thirty seconds. Invert, do a quick Levels or Curves, and the result builds more or less a digital contact sheet that is adequately legible to decide which pictures actually deserve the salute of printing-resolution acquisition.
Posted by Carl Weese at 6:00 AM