A One-day Vacation in West Texas, 1992, with a bit of New Mexico

One of my clients back in 1992 was a fund development consultancy in the Boston Area. I did the design, photography, and production supervision (print) for fund raising brochures (they handled the text.) Several of the clients I worked with were healthcare organizations.

The brochures were nicely produced (if I do say so myself) and were printed in a limited run of 1,000 or so. They were primarily used as pitch support to be handed to the people fund raisers hoped would be six-figure donors. Then distributed more widely to get the story out. Always sent to all local media outlets.

St. Mary of the Plains Hospital in Lubbock, TX, hired the consultants to help with a campaign to raise money for a new addition and support for community outreach work. I flew out on a Tuesday and spent part of that afternoon and all of Wednesday wearing my metaphorical art director's hat. Scouting locations, recruiting staff and patients to appear in the project, working with the consultants' staff person assigned on site for the campaign, as well as the head of the hospital's PR department. I shot the brochures in a very documentary style, in black and white, using 'real people,' no models or stand-ins, real narratives in pictures and text.

Thursday and Friday I switched to my photographer's hat to shoot the list of situations we'd scheduled to fill the twenty-four-page brochure.

The airlines at this point had a strange promotional program—I never quite figured out what the rhyme or reason of it was. If you booked a round-trip ticket with enough days in between, four or five I think it was, including a Saturday overnight, there was a big discount on the fare. Much more than the cost of an extra night at a modest hotel. I was doing the work on a project bid basis, not day rate, so any savings would stay in my pocket. Never having been to West Texas before, I planned to get a good night's sleep after the wrap Friday evening, then take a single day vacation on Saturday.

Saturday dawned dark and stormy. Wandering around Lubbock looking for things to photograph wasn't going to be such a fun time. No problem though, my rental car had unlimited mileage, so I could go exploring for no more than the cost of gas. I headed due west on Texas Highway 114, through Smyer, Opdyke West, Levelland (aptly named for the High Plateau), Whiteface, and more. In the rain. No, I don't remember the town names; I'm using AppleMap.

I left most of my gear back at the hotel, took a small bag with two Leica M6 cameras, 35 and 50 Summicrons, and a few rolls of Tri-X. I pulled over to the shoulder for anything that looked interesting. A few times some other interesting thing happened after I'd stopped. At some point I crossed the border into New Mexico. Portales, Clovis. Farwell on the NM/TX border, then through Muleshoe and Sudan on a 45° angle headed back for Lubbock. It stayed dark and stormy all day, which I really enjoyed visually. I wound up back in Lubbock early in the evening, having used, as I recall, 560 of those free miles on the rental. Had dinner at a vegetarian-friendly Mexican restaurant, and caught a mid-morning Sunday flight back to Bradley.

For the next couple days I'll post pictures from the one-day vacation. I've just scanned them and worked up digital negatives. I'm going a bit contrarian and trying the set of ten pictures as miniatures, little 6x9-inch palladium prints, since everything is bigger in Texas, and it seems appropriate for the dark, brooding conditions that Saturday. 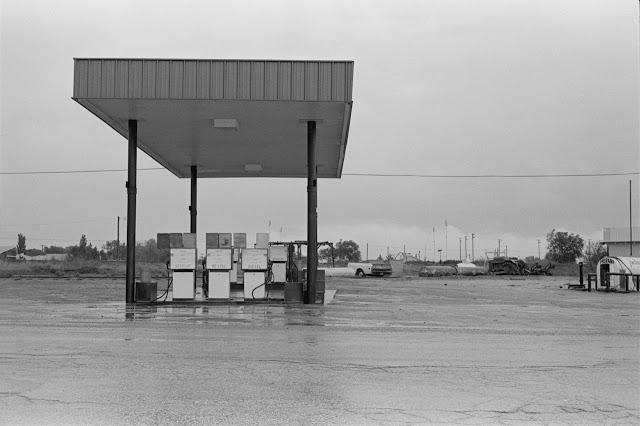 on the road, west of Lubbock, Texas 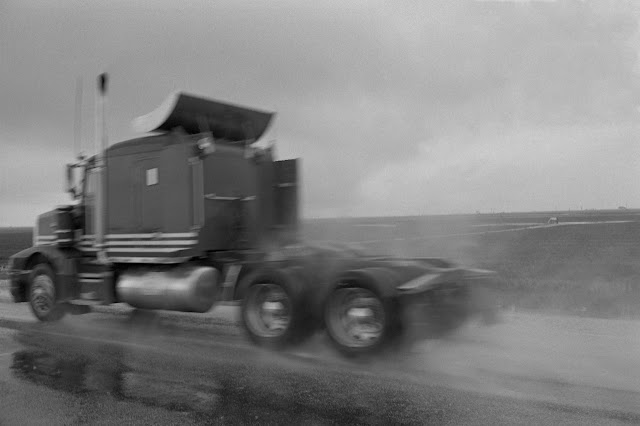 Bobtail heading east, toward Lubbock, on 114

I like...very much! Looking forward to seeing more, and also in perspn, in time. Saturday night stay was a way of having a sale to encourage tourists without giving business travelers a bargain. n

Two flavors of Fabriano arrived today. Will likely be printing these and the Kingston set this week, digital negatives output and ready.

That sounds like a reasonable explanation of the Saturday stay-over fares.

Ordered some EW and the normal white today, both hot press. Will mix up a jug of oxalic and gibe it a try next few days. Price is right, and your prints look great!

The pre-treat is just boring, not difficult. And there's almost no odor with Fab—that was a problem with a different paper that I tried years ago. Fab has big, prominent watermarks. Easy to avoid in normal cut sheet sizes with 2:3 proportion pictures but may interfere—or force use of a bigger sheet—with 4:5 proportion shots.

I did the IHP shots 6x9 on Natural and plan to do West Texas the same way. For the Kingston series I'm going 11" wide on Extra White.