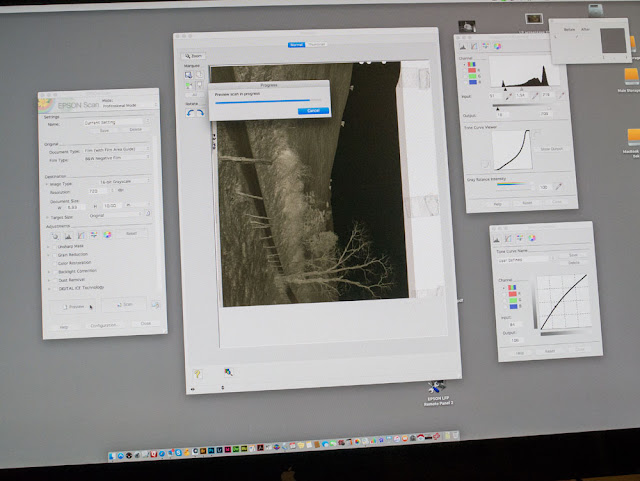 Yesterday afternoon I scanned nine pictures made in 2004 and 2005, some of my, "Southern Mountains" series, shot along the Blue Ridge Parkway and in West Virginia. It turned out I had never done high res scans from the negatives; the gallery on my web site was scanned from prints. They're 7x17-inch negatives, made with my Korona Panoramic View. In the past I used a troublesome Microtek tabloid scanner which got (almost) the whole negative in one pass, but needed lots of care and feeding to handle the range of a black and white negative. It also broke down, was badly "repaired," and then got orphaned for driver support. Almost typical of digital equipment, buy it, use it as much as you can, because within five years it won't work any longer, for one reason or another.

So I'm scanning the negatives with an Epson V750 Pro, which has a transparency scan area of just 8x10 inches. However, whether by sheer accident or plan, the scanner lid doesn't "bite" a negative that's longer than the bed. So you can safely scan the negative in two passes. Which is really tedious.

But it works quite well. It's the first scanner I've had, and I've been using them for 25 years, that has software that can understand a black and white negative. Previous scanners have all thought black and white film was just color negative film without color, which is totally wrong. Color negatives are soft mushy dye clouds with a heavy orange mask, all of which was perfect to work in projection printing onto color print paper. But it drove early scanners crazy. At the same time, when flatbed and slide scanners got to be reasonably useful, they did color slides pretty well, color negatives OK if there was a preset for the specific film type, but couldn't do black and white negs worth a damn. I always figured it was because the designers had no idea what a black and white negative is. It's silver deposited in gelatin, and has a density range much more like a color transparency than a dye cloud negative. So you had to tell the scanning software that you were scanning a transparency. Use the preview/prescan tools to make it look like a good negative. After acquisition, you inverted the file in Photoshop to make it a positive. Scanners that made horrible scans when set to "black and white negative" delivered perfectly usable scans, if you lied to them. The V750 can be set correctly and take in the full range of black and white negative with room to spare at both ends of the histogram.

Another point is that scanner previews are never accurate. If you work hard to make the preview perfect, you will usually get a bad scan with clipped shadows and highlights. This is still true with the V750. I set the prescan controls so there is plenty of headroom and footroom. Nothing below Level 20 and nothing above Level 235. This delivers a file that is delightfully like what David Vestal said about Walker Evans's prints—"Pale, but all there." Since the acquired data is in 16-bit grayscale, there's lots of room to use a Curves Adjustment Layer in Photoshop to bring the tone up to a good dynamic range.

I place the film on the scanner glass emulsion side down, the wrong way, because the emulsion side is much less likely to suffer Newton Rings than the shiny back side of the film in contact with the glass. Little tabs of tape, six of them, pull the neg tight which helps scan quality and also reduces risk of Sir Isaac interfering. This is a drag, but I keep reminding myself how much less trouble it is than wet mounting on a drum scanner.

Along with having to scan each picture twice, the pieces have to be oriented and assembled. Each scan gets rotated 90° clockwise or counter, then rotated Flip Horizontal, then saved. Then I select the pair in Bridge and call up Photoshop and Photomerge. It's important then to select the last option, Position Only. Otherwise PS will imagine all sorts of stuff that it thinks should be perspective corrected, with disastrous, and sometimes hilarious, results. 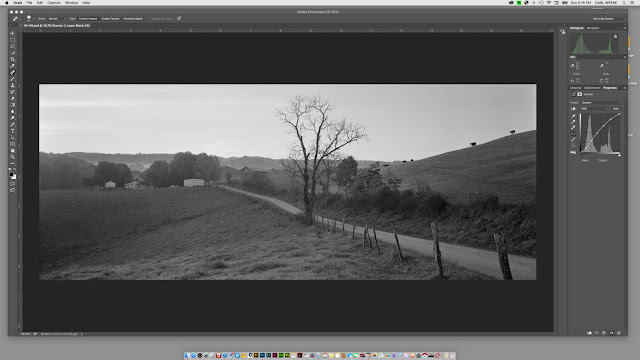 Here's the assembled scan in a screen capture from Photoshop, edges cropped away, and given its initial tonal adjustment using a Curves Layer. "Dawn, Bean's Farm, Birch River, West Virginia, 2005."

UPDATE: Just a note to say that comments have somehow been getting routed to an "awaiting moderation" folder at Blogger instead of showing up in my email, so several have just been posted and I'm not sure how long they've been sitting around.
Posted by Carl Weese at 6:26 AM

Email ThisBlogThis!Share to TwitterShare to FacebookShare to Pinterest
Labels: behind the scenes, photo-tech, roads, rural scene

And again learned something!

Carl, Thanks for posting. I also have the 750 which can do a wet scan, but never tried it - the stuff you have to use is nasty! About digital equipment, Why? I been in the software biz forever and our products, by contract, still have to support the IBM MVS 3.8 op sys which is 1) no longer supported by IBM, and 2) not used by anyone that I know of. I had to upgrade my MAC Mini because Quicken would no longer run on my older mini. But wait, I can't get rid of the old mini as I found out yesterday when I tried to open a spreadsheet on the new mini that was created on the old mini and it said "sorry, too old". WHY? sorry for the rant, but old mainframe guys have very little tolerance for these PC software folks.......Again, thanks for posting the results of all your testing......and I agree about Evans!

I've been enjoying your posts about scanning old negatives and the results you've been getting. I've tried shooting some B&W film this last year and have sent the film out for processing. The lab returns the developed negatives and "hi res" scans on a CD. Have you ever compared the quality of the scans you get with the Epson V750 with what a commercial lab can provide?

Ed, that would depend greatly on what the lab is using and how trained the staff is. For a for-instance, my 35mm scans from the V750 as acquired in grayscale take up 65 MB of storage, triple that once made RGB. So if a roll of film fits on a CD, the scans are either not very high res, not 16-bit, or JPEG-compressed. Even so, if the tone is OK with no clipping of shadows or highlights, they might be quite useable.

Thank you for the ongoing scanning tutorials - it's a treat! I also have a V750, though I haven't done any scanning for quite some time.

These tips will help when I get back to it, though I do wish GIMP had 16 bit support.

Are you using Epson Scan or a different application to control the scanner?

I'm using the supplied Epson Scan program, then after acquisition take the files into Photoshop CC. In the past I've found SilverFast a better program for color scanning, but I don't like its interface and find that the Epson software is entirely adequate for what I'm doing. Of course it would be great if the scanner could have enough ppi and acuity to actually resolve the film grain of 35mm, but it's fine for modest size enlargements.

If you're stuck with 8-bit support only, then you might ignore my advice about making a pale, play-it-safe scan. You'd be better off trying to get a really "perfect" 8-bit acquisition, even if that means making several attempts to tweak your preview scan until you get something just right into your final software. You just can't get away with a lot of tonal correction on an 8-bit file.

Looking forward to some LARGE palladium prints! How big are your trays?

Thank you - I will not stick with the 8-bit maximum of GIMP, I will find another editing package. I don't feel I need the full Photoshop capabilities, so I will look around. I normally use VueScan but have also used the Epson Scan. I'll revisit both and compare the results. I am more comfortable with the VueScan interface.

Thanks again for the tips.

Just a note to say that comments have somehow been getting routed to an "awaiting moderation" folder at Blogger instead of showing up in my email, so several have just been posted and I'm not sure how long they've been sitting around.

John, you've mentioned that you've used a hi-res digital camera to "scan" film originals. Have you done this with 35mm negatives, and if so what was the result?

Carl:
I'm sure you were looking for input from "another John", but thought I would share my experiences with you. I have used a Fuji S2, Kodak 14nx, and the Nikon D800E with pretty darn good results with shooting B&W negs and color transparencies, using a lightbox, and an improvised stage for holding the negs, or transparencies. Shoot in RAW, and reverse the negative in the Tone curve option. Of course this gives you all the RAW conversion tools, which work a lot quicker than using layers in PS.

Once again, comments are getting shunted off to a folder at Blogger instead of my email. Just some, not all.

John, how do you reverse the negative in the Tone Curve panel of ACR? I'm not seeing any options for inverting the tones.

Oh, I found it. Just drag the linear curve endpoints from top to bottom, and vs versa. Cool. I wouldn't have thought of doing that.