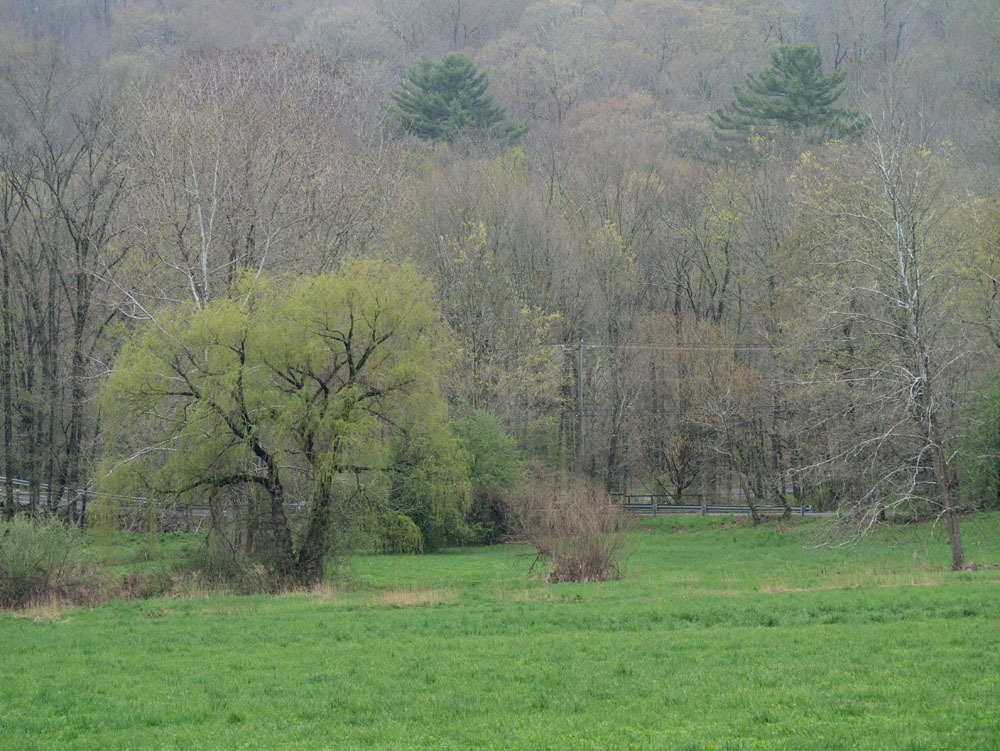 This is the view across a farm field that I've photographed many times, in many seasons. I also walk past it, perhaps 300 times a year, because it's at about the halfway point in my four mile walk, "around the block." For years I've had a wave and nod relationship with the farmer, a robust man I'd guess to be in his seventies. He'd be out tending his two cows and several steers, or working on the farm equipment, or out working the fields, and we'd wave. Maybe we'd comment on how hot or cold the day was, or how windy. The wind is fierce through here and windy winter days are the ones I walk around a different block. One time as I walked by I saw that, in the open entryway of the barn, one of the cows had managed to get her front left hoof stuck in a shipping palette—I banged on the house door and told him so he could go rescue her.

A couple weeks ago as I came around the block, he was carrying a bucket of something to the far end of the cows' enclosure, a couple hundred yards from the barn. I asked why the Room Service, and he said she, the black cow, was due to deliver a calf any minute, so he was giving her a break. Over the next ten days the two cows, one black, the other brown and white, each delivered a beautiful all-brown calf. Whoever the father is must have dominant genes.

Tuesday I had to plug my ears about a mile into the usual walk to block the scream of an ambulance coming from behind me. Fifteen minutes later, I saw that the ambulance was at the farm. EMT's won't say anything to a stranger, so I walked on. Today, after printing all morning, I headed out around the block, and saw a woman, perhaps 35, talking on a cell phone in the driveway of the farmhouse. I stopped and interrupted her conversation to ask if everyone was OK. She said, "Yes, we're fine," in a way that seemed ominous. So I said that I'd seen an ambulance here the other day. "Oh. OH! Yes. My Dad passed away."

I never knew his name, but think of him as a friend. I've been around for people dying long slow deaths from nasty diseases, and people living uselessly with a sound body housing a ravished brain, so I guess this isn't that bad. He sure went out with his muck boots on.

UPDATE: Via the Waterbury Republican newspaper, his name was Thomas Lizauskas. He lived his entire life here in Woodbury, was from a farming family, and loved the outdoors. He was exactly my age.
Posted by Carl Weese at 4:57 PM

A very thought-provoking picture and comment. It does sound like Mr. Lizauskas' life ended as he probably wished it, and left you with some pleasant memories as well. The split tree in your picture makes me wonder if there are hints of a more complicated story. And of course there is the most important question for a country-dweller -- will the farm stay a farm?

Scott, I haven't had a chance to look into it, but Tina is quite sure the entire parcel is already set up as a land trust of some sort, common around here. Yesterday there was no activity at the farm house, but the two cows and two little calves were contentedly resting under the trees at the far end of their field. The big fields are mostly in corn this year and the crop looks ready for harvest.