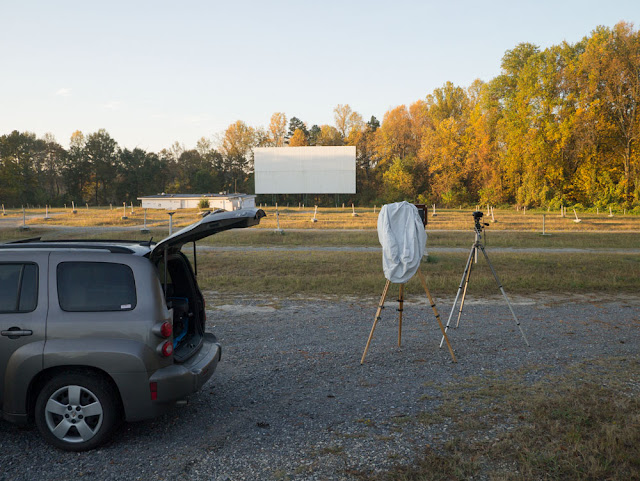 There have been some questions about some of what went on behind the scenes on The Giant Drive-in Theater Road Trip, dealing with both technical and aesthetic choices. I managed to reach a total of 107 theaters, more than I'd expected, but I knew from the outset that I wouldn't be able to photograph all of them with large format. Aside from direct expense, I'd never finish developing that much film—simply not feasible. Back in 2002 I made a smaller though still substantial trip hunting drive-ins across the upper tier of the country as far as Montana and Idaho. I'd guess I only photographed about half of the theaters I found on that trip. The others were either cookie-cutter dull, or simply didn't offer any unique aspects in either structure or setting. In retrospect, I wish I had photographed them for purely documentary purposes using 35mm film, but it wasn't on my radar. 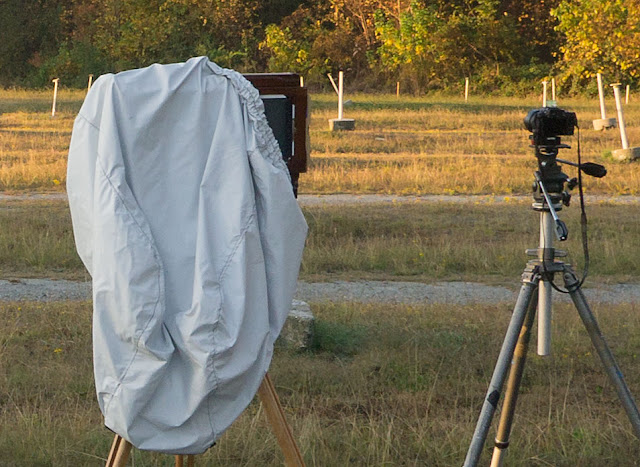 On last year's trip I was again looking for unique combinations of structure and landscape, but this time when I decided to do an 8x10 or 7x17 inch shot, I backed it up with similar framing using digital capture, then went on to document any other interesting aspects of the place. If I decided a theater wasn't distinctive enough to get large format film coverage, I still shot the most interesting views I could find using "free film." In a few cases, the theater's appearance was so "about color" that I shot only digital capture for that reason. Above you can see my  sunrise setup at The Sunset theater with a 7x17" Korona on a big Ries tripod and a mirrorless 4/3s camera on a very sturdy series No. 4 Gitzo. 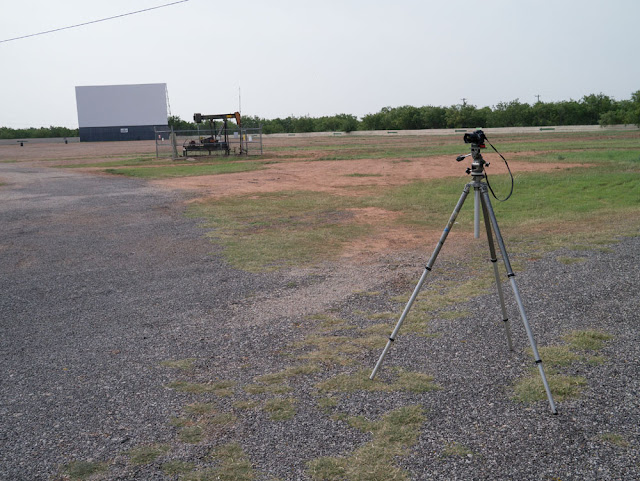 The Town and Country Drive-in has an enormous field with three screens. Along with pictures with both big cameras I shot a lot of other angles digital only. There were several oil wells on the site, but sadly they don't belong to the theater owner. "If I owned the mineral rights here, I wouldn't be worrying about the cost of converting to digital projection." 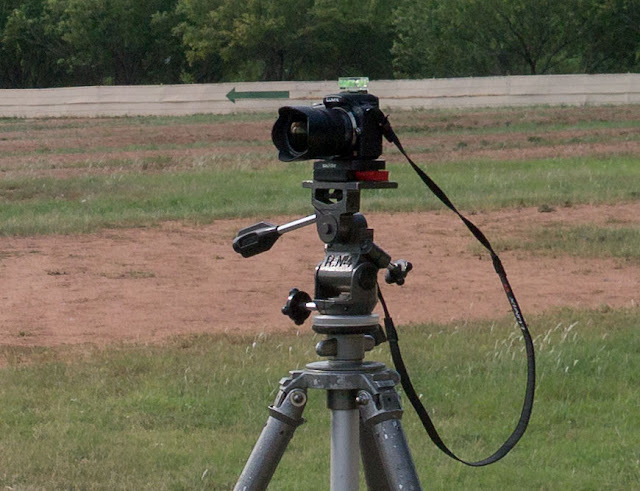 The vast majority of digital captures at the theaters were made with a Lumix 7-14mm Varifocal, a lens with stunning optical quality that I bought specifically for this project. You can see a two-axis bubble level in the accessory shoe of the Lumix G3—I wanted the digital captures to reflect the same architectural/documentary style as the view camera work, which among other things meant keeping the camera perfectly plumb and level. Harder to do hand-held than you might expect, because at a drive-in most of the subject matter is not level. Screens lean forward, the ground is plowed into semi-circular ramps, concession stand roofs are often slanted. It's a lot easier to use a tripod and a level. This also meant I could work at optimum aperture and base ISO no matter what the light level. That's a compact quick release mount between the tripod platform and the camera.

The constant process of deciding whether each theater was going to get large format treatment was the hardest aesthetic judgement of the project. Also, I found it was important to do that first—begin by finding the ideal 8x10 and/or 7x17 shot, if there was one. Only after doing the large format work, or deciding not to, was it safe to do the digital capture coverage. I discovered that if I began with capture, it threw me off finding the perfect position for a large format shot. I know some people use digital capture as a kind of sketchbook to explore or scout a location, even using the captures to help decide what the best spot is to set up a large format shot, but that approach totally backfires for me.

Aside from structure and setting, two other things influenced the format choice. A few times, the moment I looked at a place I could see the platinum print in the back of my mind. Or, as I found the perfect place to stand, I realized that I would really love to see this as a big print. I've never been drawn to gargantuan prints, and of course I've done a great deal of my work using very large cameras to make rather small contact prints in platinum. But the drive-in theater subject in particular lends itself to prints larger than I normally make. Partly it's that the pictures often combine a broad landscape view with highly detailed structures that invite close examination. A scan of a 7x17" negative allows a very large panoramic print with exquisite detail and tone. A few years ago I had an exhibit of some of the earlier project material, showing prints with a 13x32" image area. (Less than a 2X enlargement.) While doing the scans and prints, I repeatedly found picture elements—a tractor mowing a hay field in the background, captured in a half-second exposure exactly as it rounds a corner of the field, for example—that I had been hyper aware of as I made the shot, but forgot about afterwards and didn't notice in the contact prints. Most of the time I'm happy with prints in the 11x14 to 16x20 range, but with this special subject, sometimes the best presentation is a much larger print with quality only available from large format film.
Posted by Carl Weese at 4:55 PM

Thanks for the behind the scenes look.

Are you planning to publish scans of your large format prints for this trip like you did your earlier drive in theatres?

Eventually. Because I returned from the Southern Loop into a giant storm and week-long power failure in late fall, that set of negatives isn't even developed yet. Darkroom had to be shut down for the winter. The big job is organizing all the material, the photographs, the interviews with owners, the text on the history of drive-in theaters, into a manageable size for a book.

Have you thought about the EM-5?

I like that Olympus and Panasonic lenses can be used on both companies' cameras.

Mike, from what I can tell the new Oly probably has a noticeable improvement in exposure range compared to the G3, as well as image stabilization, but not much else that improves on the older camera. My examination of some files from it shows somewhat lower resolution (probably from a stronger AA filter than Panasonic uses. Since I have two G3 cameras in perfect working order I'm not inspired to spend a grand for that small a practical upgrade, and have to cope with a completely different user interface as well.

Totally agree about the interchangeability. I have the Oly 45mm instead of the Lumix/Leica one because the fast aperture is much more useful to me than macro focusing. It's great to have these choices.