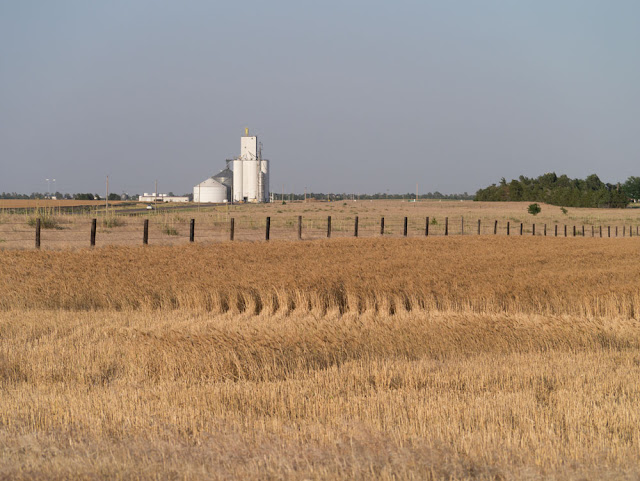 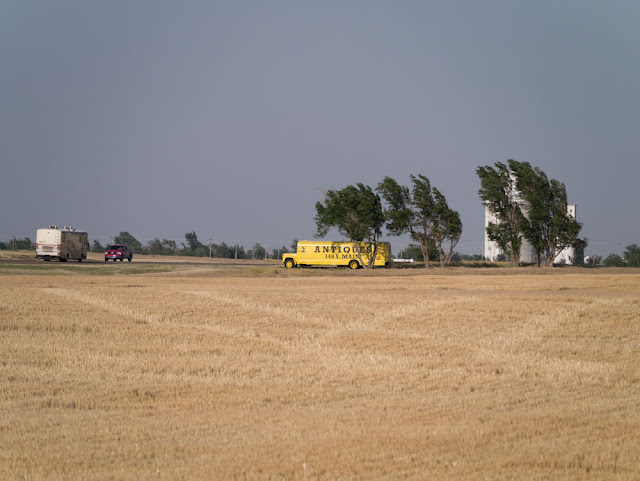 After photographing the theater at Dodge City on May 27, not wanting to go all the way to the next one at Medicine Lodge, I thought the farmland around Greensburg looked interesting in the late afternoon light and the GPS said there was a Best Western in town. There didn't seem to be a town, just the new hotel, and some half-completed residential and commercial buildings. Once I got checked in and hooked up to the WiFi, I discovered that the whole town center was blown away in a tornado almost exactly five years earlier.

Still, the Kansas wind on a clear day is amazing. By this time I'd gotten used to driving in gusts so strong that you simply have to let the car shudder and shimmy a little while letting the steering wheel shake in your hands. You keep a steady enough course by snubbing the action of the wheel at a few degrees rotation—trying to hold it still just doesn't work. A mile or so out of "town" on the two-lane highway 183, I turned onto a narrow side road between the wheat fields and looked for a spot to photograph the old bus-now-billboard with the wind-bent trees, grain elevator behind them, and traffic on 183. My idea was to get out the Lumix 45-200 lens, which has image stabilization, and shoot out the car window, when suddenly the car was bucking and jumping like the engine was idling on three cylinders, "what the hell?"...then I realized the engine was shut down, parking brake engaged, stick in first. It was the wind. So much for shooting out the window. After moving the car forward just enough, I got out (nearly having my foot amputated by the wind trying to slam the door back on me) and crouched behind the tailgate in the wind shadow of the car to make the shots. I've used a car or truck to create a windshield on other expeditions in other parts of the country, but never needed it so badly before.
Posted by Carl Weese at 6:00 AM