Storm VIII: No Plow for You 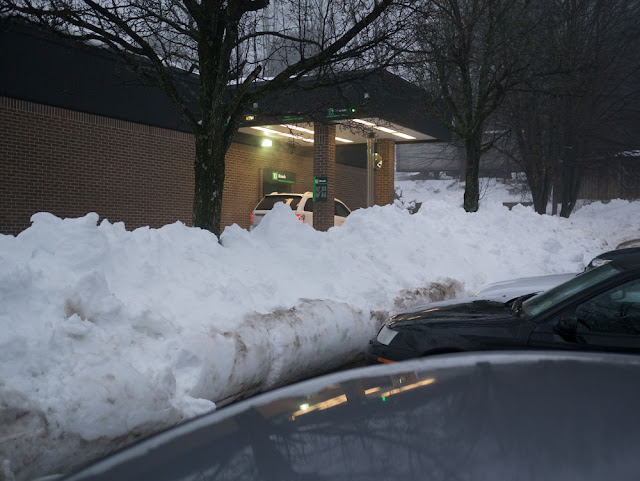 Around noon we found out the guy who plows the driveway when it's too deep to scrape off by hand, decided it's too dangerous to plow here. He was getting stuck on flat driveways, while ours is steep and circular/keyhole. With rain beginning to fall, the snow could only become more impossible to deal with as it became more saturated. Two and a half hours of shoveling cleared a just wider than the Honda lane down to Washington Road. At that rate, if it doesn't get worse, it will take five hours to clear the rest of it so the oil tanker can get in and fill the tank. The stuff is so heavy, getting worse as rain drizzles down, that each shovel-width has to be taken in four layers to get down to the asphalt. Each shovel full sticks to the shovel so you end up moving every pound of snow at least twice. Tina, meanwhile, got her sharp gardening spade and worked on the piled-up mountain of pushed slush the state trucks piled up at the mouth of the drive. At least six feet high, more than that deep at the base, and the far edge is out over the painted line for the travel lane of Route 47. A Good Samaritan, I think he works part time for the construction business with its office across the street, stopped and helped Tina. They finished with the mountain—just wide enough for a Honda Fit driven straight through—almost exactly as I met them working down the steep forty-foot straight section at the base of the circle. I thanked our benefactor and introduced myself. Buck, a compact man with a gray beard who looks to be about my age, had been flinging the packed ice off his snow shovel with abandon. He shook hands with a paw that felt like iron. He allowed as how he'd be happy to give me a book about The Good Word of the Lord, but OK if not. I allowed as how that didn't fit my interests, but said I hoped that I'd have the opportunity to do him a favor sometime in the future.

Tina said, "Very clever, put the girl out hacking away at the mountain by the road and see if you catch a Good Samaritan."

Freezing rain is in the forecast, which would make the stuff literally impossible to shovel. The plows across the state, by news reports, have run out of places to put the snow, or can't maneuver safely on the gradients. They are having to find front-loaders and haul trucks to get the stuff out of the street. Lots of in-town people have shoveled their short driveways only to find 38" of virgin snow in the street.

I decided I wanted to move the Honda from where it had been parked to near the bottom of the driveway while the shoveled pavement was just wet, not need to do it in the morning with new ice on the drive. So while I was at it I made a short errand trip into town, took a look around, and did a couple of snaps. 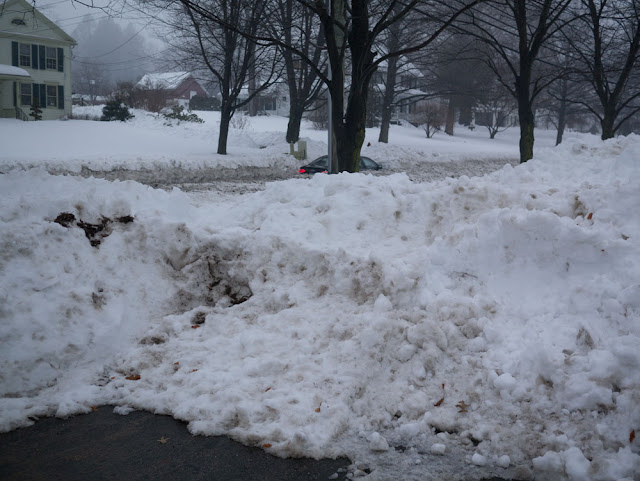 Email ThisBlogThis!Share to TwitterShare to FacebookShare to Pinterest
Labels: behind the scenes, weather