Early Morning, On the Road 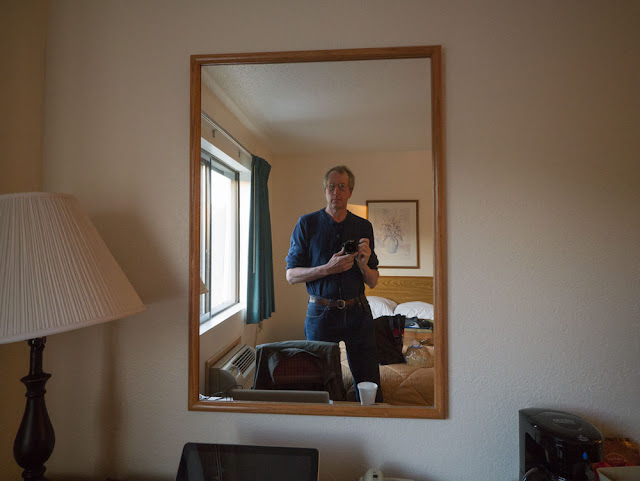 There probably are some photographers who have never made a self-portrait, not even a picture including a shadow or intentional reflection. Then there are a few who make nothing else. I guess there's a sliding scale between the two, and I'm way at the left. Back on April 23 I had just reloaded my sheet film holders, as shown in this blog post from the road. After I'd made a snap of the changing tent setup, I noticed the interesting morning light in the economy motel room and knocked off a few frames. Then I was ready to set off for a day that would cover about 300 miles, mostly in Missouri, and get photographs at four drive-in theaters. Quite a typical day for the trip in fact, exactly the average mileage, though with more closely packed theaters than usual. It's too bad I didn't think to do another motel room mirror shot six weeks later, at the end of The Western Loop of the Giant Drive-in Theater Road Trip, to record the grizzled Ancient Mariner look that had set in, but it didn't occur to me. Too tired, probably.
Posted by Carl Weese at 5:20 PM

Carl, do you have a diary tool that collects your stuff, connecting locations, events, interviews and pictures on three instruments (4?)? You seem to be able to go from a date to names of subjects to the sequence of locations without any effort. Are the B/W negatives in this system as well?

It's centered on the filenames. At the end of each day I download the files from both digital cameras into a folder with the date as name. In Bridge, I Sort the files by date/time, then do a Batch Rename so the filenames become yymmdd_0001, etc. Now if I edit the pictures into a Collection, or copy files into a Selects folder, with Sort set to filename everything goes directly into chronological order.

I take notes by hand and with a voice recorder, and also may do some purely informational captures that record a street sign or historical plaque. Once I've typed up the notes as a word processor file, it takes no time at all to check the date on a picture file and find the notes in the text file.

For the large format negatives, I keep an older digital camera with the LF equipment, and when I finish a shot, I shoot the set from behind the camera. This gives me a time/date-stamped file showing the subject and identifying which format was used. I began to do this purely record-keeping work with a digital P&S years before capture was ready for prime time.

But then, I'm including photographer shadows as self-portraits.