Another Drive-in Theater in the Cornfields 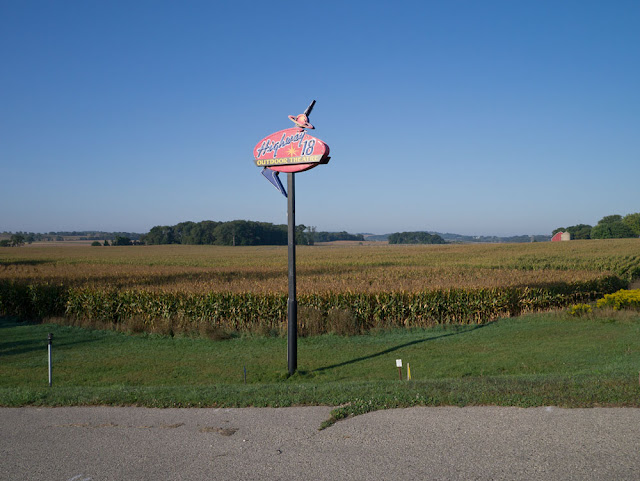 Jefferson, Wisconsin
The Highway 18 theater, which has been operating since 1953. Highway 18 would have been the main route between Milwaukee and Madison back then, though there's an Interstate running parallel a few miles north now. This theater had closed for the season already on September 20th, and had more hostile KEEP OUT and NO TRESPASSING signs scattered about than almost any other DI I've ever found on my expeditions. Well, there was one in West Virginia that had a sign that said, "Trespassers will be shot, survivors will be prosecuted." Luckily, I found nothing particularly special about the theater itself, other than a lot of obsessive-compulsive instruction signs about how patrons should behave. But the marquee is literally unique. I've never seen anything like it. The tall pole could make you think it's like a modern gas station sign lifted to be visible from the highway, and perhaps this presentation doesn't go all the way back to the fifties. But the graphic style of the sign is pure "Googie" style. This was very big during the heyday of the DI theater so either the sign has been there all along or, if it's new, is a conscious tribute to DI theater traditions. Either way I found the marquee was worth two very different pictures with the 8x10 and 7x17 cameras. This M-4/3s digital capture is close to the 8x10, but still a third rendering of the subject. 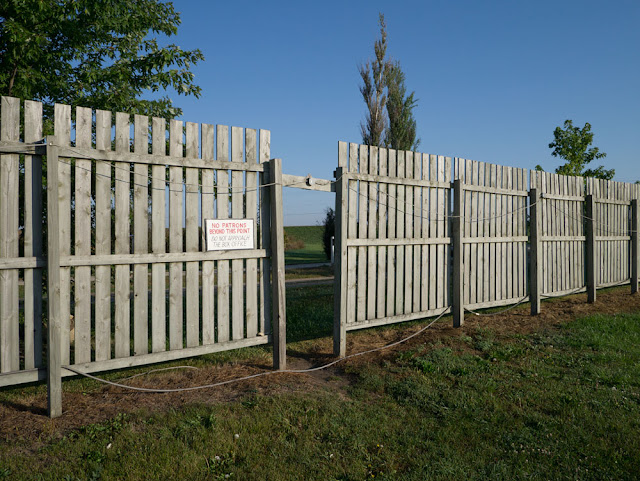 Jefferson, Wisconsin
Of course I disobeyed the signs, just not with 40+ pounds of view camera equipment. I made a quick survey with a digital camera in hand. Just one of many micro-mangement signs was next to a gap in the fence. It said, in red, NO PATRONS BEYOND THIS POINT,  and then in black, DO NOT APPROACH THE BOX OFFICE! Hmm, survivors will be...
Posted by Carl Weese at 4:56 PM

I can't resist: sounds like a republican kind of place. Cue the theramin.

Wouldn't one spelling test be enough?

It used to be just one, my guess is the spambots got too smart for that. I will try turning it off after I have a chance to cross over to the new blogger interface, but expect it will result in a flood of false comments.

Dennis, I turned off word verification overnight, and was greeted this morning by a small flood of comments...all spam. Martina says they've changed the verification again and it's not as hard to read. I'll have to go look from another computer.