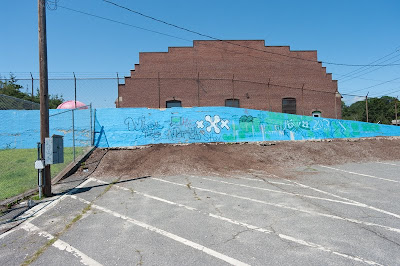 Torrington, Connecticut
Posted by Carl Weese at 6:00 AM

Interesting already through form, colors and lines, but the destination adds another level that creates tension between a deadly purpose and the friendly, warm and inviting colors.

Many images work without title, but quite a number works better with a title, like this one

Thanks Marcus. You'll be interested to know that the Armory has been converted into a gymnasium, where kids play league basketball and senior citizens walk laps around the court perimeter on weekday mornings. Worth further investigation.

Gymnasium? Excellent example for mislead thinking then... But why the fencing, the wall, the blocked road?

Hmm,interesting. The foreground isn't a road, but the corner of a parking lot for a large athletic field (football/baseball, big enough for multiple events)behind the camera position. The lot appears to have been leveled and excavated so the wall in the picture is a structural retainer. The fence though--it may simply never have been removed when the building was converted. It doesn't seem functional now, since the other three sides of the building are not fenced.

Definitely an excellent example of the influence of preconceptions when looking at a photograph. In my first comment I had stated "a number of images works better with a title", but now I would not dare to repeat this.

I responded to the lovely dance between the fence and the electric wires 'holding back' what may have been a very inviting building once....

Lyle, the building, at least on the inside, is probably the most appealing now that it has ever been. The conversion to a gymnasium was done with loving care by some combination of civic groups and city funding. Beautiful gleaming hardwood floor for the basketball court, etc.