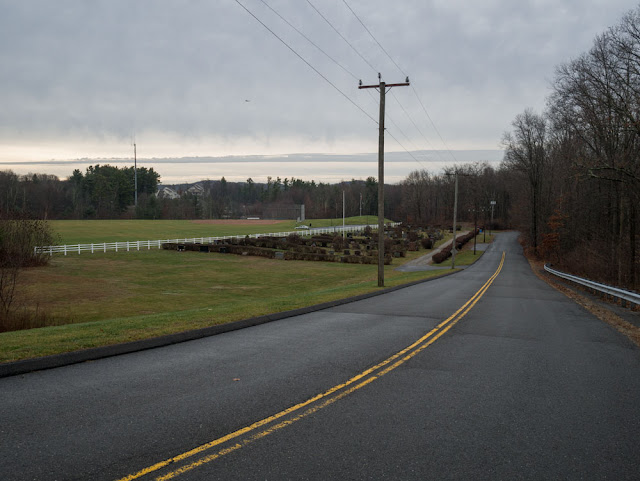 Tuesday I wrote, talking about West Texas, that here in southern New England, we don't see clouds that hang as a thin dark strip above the horizon...so of course Wednesday on my way to Waterbury to get supplies for the cats, I saw this. Really, I don't think this happens a lot around here, but there it is. The helicopter in the sky is a nice touch at a large enough display size.

Scanning all yesterday afternoon, once again from pictures made 25 years ago. This time, the series was with a traveling carnival in the spring and summer of 1990. Today, remembering something Bill Pierce told me a few years ago, I decided to forget about the pesky film holder for the Epson V750—it might be useful for batch scanning twenty negatives at once but it just gets in the way doing one high res scan at a time. So I taped each neg directly to the scanner glass, just as I do with large format negatives, and used 4800 ppi, four times what I need for 8x10 and 7x17 negatives. The tabs of tape with folded ends along the outside edge of the scanner are for those big negatives. 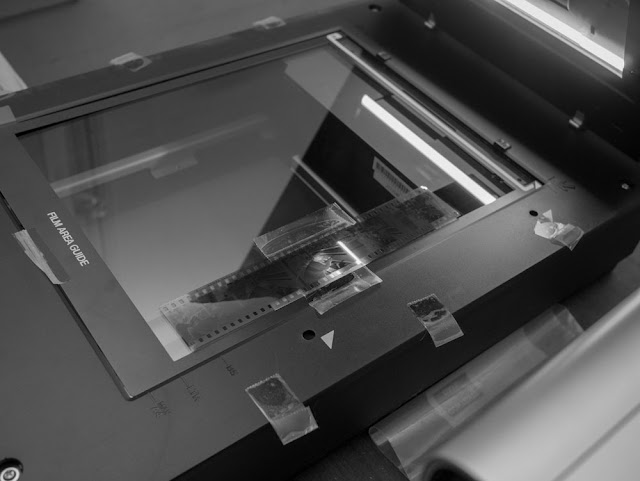 I think the scans are better than I got years ago from a Minolta dedicated slide scanner. And better than with the film holder. The scanner adjusts for holder or glass (film area guide, see first option under Original in the basic Epson scan window, below) and I suspect the focus at the glass is better. One great feature of that old Minolta scanner was that it focused for each scan. No focusing the Epson, we're stuck with the way it came from the factory. Scanning with the emulsion side down, then flipping in Photoshop, helps prevent Newton Rings since the emulsion isn't as shiny as the back of the film, and in fact of 15 scans only two got attacked by Sir Isaac, and had to be redone. 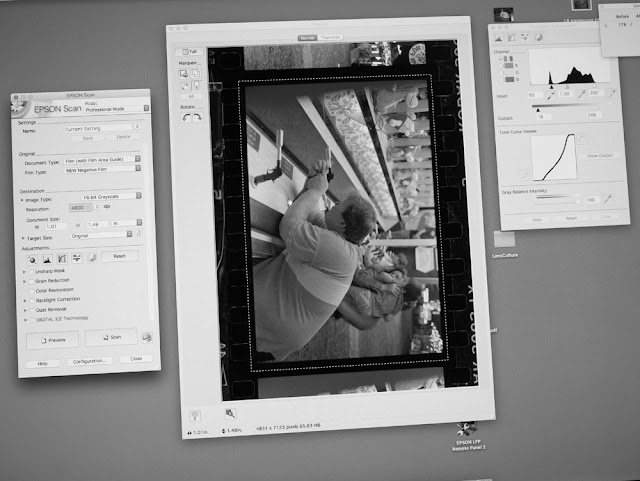 Here's a snap (not screen cap, mind the moiré), of the zoomed prescan. As with any scan I've left it quite flat with plenty of detail in the shadows and highlights. Once the scan is made I snap it up as needed with a Curves Adjustment Layer in PSCC. Another advantage, one that I wanted with this particular set which I think I will print in direct digital monochrome rather than Pt/Pd, is to retain the black edge, film border, just as I used to do using a filed-out film carrier in the enlarger for silver printing.

Don't know how well this will read, but here's a screen capture of a Bridge window with the afternoon's scanning. Click on any of the images in the post to see them all more clearly. 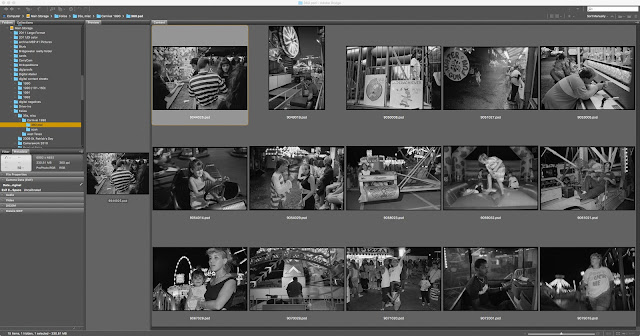 Email ThisBlogThis!Share to TwitterShare to FacebookShare to Pinterest
Labels: behind the scenes, photo-tech, weather

Your sky looks a little scary. I saw a cumulus mamatus sky just once, a few minutes before a tornado touched down in White Plains. It was like what you show. Lower and darker, but with the same undulations and bumps.
Did that one develop into a storm?

Funny thing that yesterday I forgot to ask if you are going to scan and print negatives from the carnival series - I like that so much :-). Any chance of a print sale in the near future?

Scott, it looked threatening, but just faded into a general overcast, not even any rain. Certainly unusual.

Martina, the scans used for the gallery on my web site were made from prints, so I've finally gotten around to making high resolution 16-bit scans directly from the negatives. Will have to do some experimenting to see how I want to print them. On print offers, I don't know what the plans for the near future are at TOP.

What kind of tape are you using?

Scotch Satin Finish Gift Wrap Tape (Just read the label because it's next to the scanner). Any clear tape would likely do. Don't use opaque or masking tape, it can confuse the scanner. Also, be *very* careful taping 120 film: it's much thinner and more fragile than 35 or sheet film.