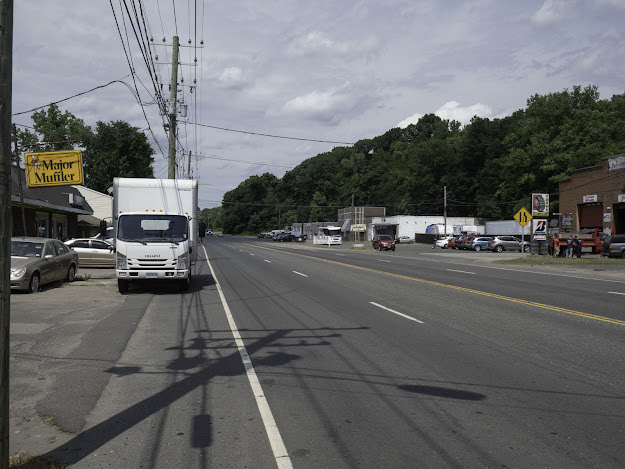 For the past month or so the exhaust on my car has sounded—"wrong." Not really loud, but just not quite right. I've had the car over nine years and driven it 117,000 miles so I know what it's supposed to sound like, and something's been off. Strangely, under hard acceleration it sounded normal (there's a place nearby where you make a full 90° right turn straight into a really steep hill so you have to run it up in second or it will bog down when you shift to third) but it was raspy and louder than usual just puttering around in normal driving and light acceleration. It's also been making a weird "thud" sound the instant the engine catches from a cold start. That's a new phenomenon, but I hadn't connected the two.

When I started the car this morning, that thud was more like a BAM! Now the exhaust was loud, not just weird. I shut it right down. Oh great, it's Thursday morning and I need to drive into Manhattan Saturday morning to teach a private, one on one, workshop, at The Penumbra Foundation.

There's a great mechanic in town who we've used for more than twenty years for our often rather old cars (we run them till they're ready to donate). His new place is triple the size of the earlier one, and it's always really busy. I called, and of course found that they're booked up over a week in advance. When I explained my dilemma, Pete recommended an exhaust system specialty place, Major Muffler, way down at the bottom of South Main Street, Waterbury, almost at the Naugatuck line.

I called and explained the situation. The guy on the phone said, let me check out on the floor, came back and said, bring it in at 2:00 PM. Wow. A two-thousand-something street number on South Main is a scruffy end of town, but the phone was on speaker and while I was doing this, Tina looked online with her iPad and said, "these guys are great, they get 4.5 star ratings from Goggle and Yelp." Well, I said, and from Pete.

My GPS got me there smoothly, avoiding driving noisily through the middle of town. I arrived ten minutes early. The front office door was locked and had a little clockface widget in the window indicating that they'd be back at 2:00 PM. It’s an old three-bay garage building with a used car lot attached. A guy pulled in with a huge RV that needed a tailpipe. 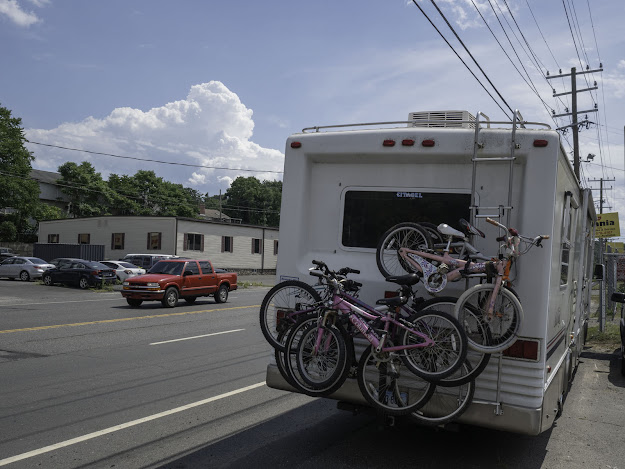 I'd been sitting in my car in the 93° heat with the AC on, deleting junk mail on my phone. When the guy got out of the RV I shut down and put my mask on. He'd been told to turn up at 2:00 as well, in what turned out to be his son's giant machine that had been diagnosed earlier in the week and needed a new section of tailpipe.
The crew came in a couple minutes after two. I followed a weight-lifter looking guy with tattoos and a big black beard, who would turn out to be my mechanic, into the office and handed over the key. There was no AC in the beat-up looking office so I waited outside. He came out a few minutes later to drive the car in, then ran it up the lift. A few minutes after that he came out and said it’s no big deal, had me come in to look. He slapped the muffler and said it’s in great shape, but the section of pipe that bends up and over the rear axel, then down again, was rotten. Pointing, he said we just need to cut out the bad section, here, and here, bend a new piece of pipe to fit, and weld it in place. Will only take a few minutes, $85. I said great! Then I hung out in front of the building, even took a couple snaps of the view up and down South Main in the 93 degree heat. The car came backing out of the garage, so I went in and paid the bill. Got in the car and it was 2:35 PM. Pretty efficient. Also a huge relief that it happened this morning instead of on the East Side Drive Saturday morning. Tina’s car has been making exhaust noise for a while now. I think I’ll take it in to these guys soon and hope for as good luck again. 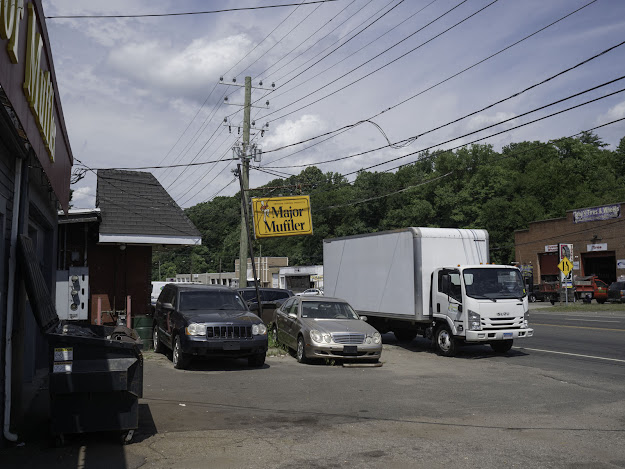