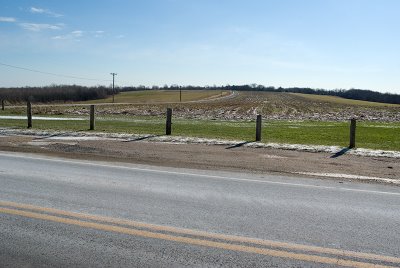 We've had an incredibly warm autumn here in southern New England, but last night the temperature dropped well down into the teens (that's something like -9°C) and it never got up as high as 20°F during the day. Of course that's about what the temperature should be in early December, but it's a bit of a shock when we've had temperatures near fifty every day up until now.

I had to do some errands today, and noticed this familiar place looking, well, very "wintry." I find winter frustrating. I just don't like winter light. Doesn't matter whether I'd like to make pictures in color or b&w, use film or digital capture, I simply don't think anything looks good—perhaps I mean looks right—in this pale, wan, harsh light. But Painter Hill, in the next town over, somehow seemed to personify what noontime winter light is all about. Did it so well that I wanted to make a picture. I find that while I still don't like this light, I do kind of like the picture.

While most of the field is planted in corn, a long strip at the right is groomed short, as a runway for the covey of light aircraft that live in and around a Quonset hut hanger near the edge of the road. Locals call it "Roxbury International."
Posted by Carl Weese at 8:09 PM

That is a big open throw-away (as in we got plenty more where that came from)space, on hold for the season. I do like winter light in that it gives more low angle (sunrise/sunset type)contrasts.