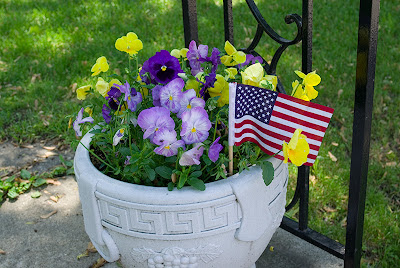 Torrington, Connecticut
Pansies and Flag
Posted by Carl Weese at 10:00 AM

Carl,
is there a flag series?
I have a little contribution on
http://thepubliceyeblog.blogspot.com/2007/05/promenade-danglaisnizza.html#links

I guess it's becoming a series by now. I like your shots with the sea/horizon theme. What were the white teepee/tent things in the flag picture?

go on with the series! It's interesting to see what happens.
I try a series with red attributes in my steet photos.

The teepee-tent-like-things on the seaside were a kind of pavillion for a coffe bar. I have no idea why they had an american flag. Perhaps they sell donuts or american icecream?-)