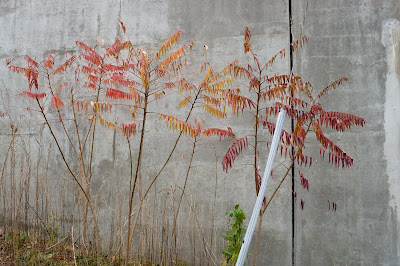 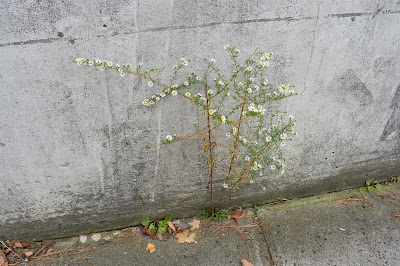 Torrington, Connecticut
Posted by Carl Weese at 7:36 AM

Especially in the iuxtaposition they are powerful. But begging pardon for my ignorance, what was the reason for including that diagonal element in the first picture? For me it is distracting and uses up quite a bit of that initial power.

"what was the reason for including that diagonal element in the first picture?"

Really, just because it was there. It was simply part of what I saw as a potential picture.

Out of curiosity I just went back and looked at the original shoot. There are three frames of this subject and this is the last. I appear to have moved about a half step closer for each shot. In the wider framings the phone pole guy-wire and shield (that's what the diagonal thing is) may be a little easier to read, but the lack of information in the tighter shot actually appealed to me.

It might help clarify if I say that I seldom think in terms of a subject and surroundings. I notice a scene and select a slice of it (usually a fairly wide slice with a short lens) to photograph. So the sumac, the concrete highway support wall, and the guy wire thing are all co-equal as subject matter.

If I thought of the picture as having a subject of sumac bushes that are in front of a background of concrete wall with a weird metal thing in front, then I guess that metal thing could be a distraction. But I just see all of those things as as a continuous field that becomes the picture. That probably doesn't really explain it very well though.

Carl, thanks for the explanation. I guess when wandering and searching for pictures my perception system still works quite differently, probably reverse engineering wise: From the apparition of the scene I associate something that I would like to condense in my image and my brain immediately starts to analyze what's supportive to my intention and in the background always works that "kill the clutter" sentence, making me trying to exclude everything I deem unnecessary or obnoxious to the image.
Your ease of percieving and recording I still do not have, but it's something worth trying if it hits a spot in my seeking.

My favorite statements about this come from David Vestal. The first is, "There are only two things that really matter in photography. Stand in the right place, push the button at the right time."

It's a very sly statement. Sounds simple until you try to figure out the definition of "right."

The second Vestal quote has to do with how to frame your pictures in the finder or on the groundglass. "Include what's important, leave out what isn't."

Simple enough until, again, you meditate on what he means by "important."

My addition to this would be that it's good to avoid thinking in terms of subjects and backgrounds and instead consider that every point in the frame, every square inch of the print, is important. The picture has to work "all over" to borrow a term from the great abstract expressionist Jackson Pollock.