At the Chinese Restaurant 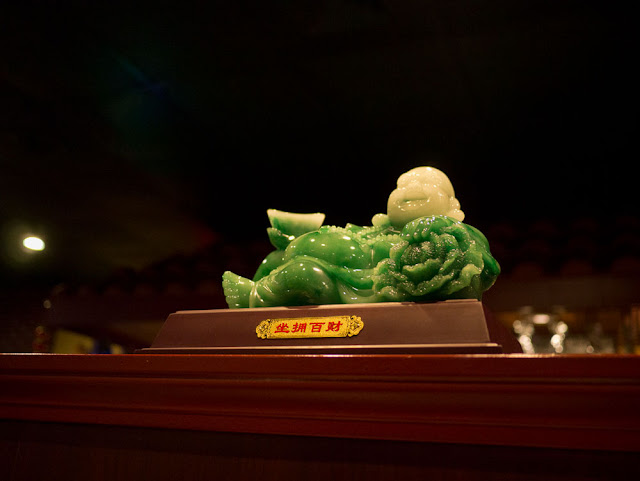 For at least twenty years we've gone once in a while to a Chinese restaurant about ten miles away because it's always been better than the come-and-go competition, at reasonable prices.

Saturday we went with my new friend Rogelio, who took my Introduction to Platinum workshop at CAP/ICP late last March. He's a college professor/researcher (biology) in Mexico City, but has been spending six months on a grant at a college in NYC. Which put him in a great position to indulge his passion for photography by taking courses in the Big Apple, and environs. He wanted to have a two-day private workshop before I left on The Giant Road Trip, and we squeezed it in this past weekend.

One of the things we looked at was how good a palladium print we could make from digital enlarged negatives he'd prepared at ICP (their equipment, Epson 3880 printers, using Dan Burkholder's system) and the answer was, very promising. Using "new Platine" paper, the negatives had enough UV-blocking strength in the highlights to print with a simple palladium formula using no contrast agents. The results were enough to make me interested in exploring the digital negative system for my Z3200 as a high priority among the myriad tasks to be done between the two sections of the drive-in theater road trip.

The restaurant had changed since we were there last. We didn't see the couple who had obviously been the owners, or any of their kids who worked there as they were growing up and then in summers when they were in college. The menu had gone general-Asian with Thai and other specialties not seen before. My "Chinese vegetable soup" had turned into "tofu and vegetable soup" in a vegetarian section of the new menu. It was only a little different from before, and just as good. So was the vegetable moo shi. What Tina and Rogelio ordered, which included the new Thai dishes was good too. Another thing about this place, which is located in a nondescript strip mall, has been the wonderful giant-scale Chinese ink brush paintings on the walls. Very beautiful. They're still there, but now there is a scatter of 32" flat-screen TVs, which I could do without, and some jade-ish small sculptural objects which are not, let's just say, on a par with the wonderful ink-on-paper paintings.
Posted by Carl Weese at 6:00 AM

Email ThisBlogThis!Share to TwitterShare to FacebookShare to Pinterest
Labels: behind the scenes, found objects

I thought this was something to eat.

Martina, that could be worse than a peanut M&M...