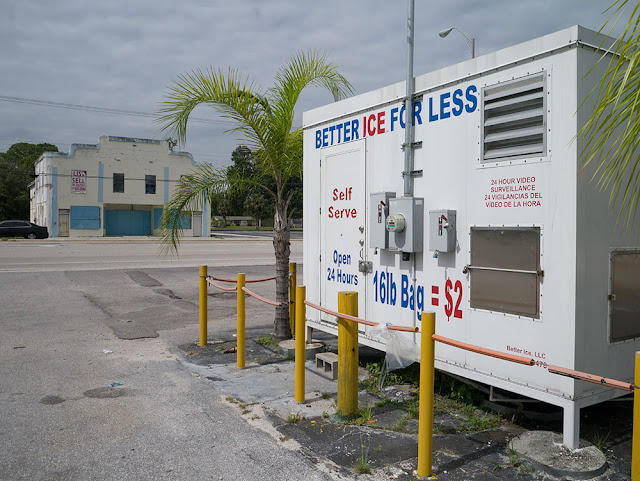 This is along highway 41 in a strip-mall of shops, eateries, and a Dollar General. The buildings look pretty old and a bit run down, but most are occupied and open for business. This is in contrast to a recently built shopping center a few miles north that is both upscale, and mostly vacant. The real estate crash manifesting again. The building across the street was originally a movie theater, many years ago, and has clearly been out of service for some time. There's a multiplex a few miles north.

$2 is real cheap for a 16 pound bag of ice, but I don't know if the product is better or not because I didn't buy any, even when I headed north at the end of my stay—that's too big a bag! I have a fairly large cooler that I need to keep continuously supplied with ice (except during my week in Ruskin staying at a suite with a full kitchen) because I basically don't eat at restaurants while traveling alone. I get all my vegetarian supplies at supermarkets. One time earlier this summer I made the mistake of buying two 8 pound bags because the price was good, then realized the cooler had hardly any room left for, you know, the food!

The light a little after one, in the shot above, was softened by some fast moving clouds that strongly filtered the sunlight. Two hours later, the sky pattern had changed completely, with clear sunlight making sharply defined shadows, but enough clouds to bounce the light around and open up those shadows. In both of these pictures I see light that's really different from what I'm used to in Southern New England. 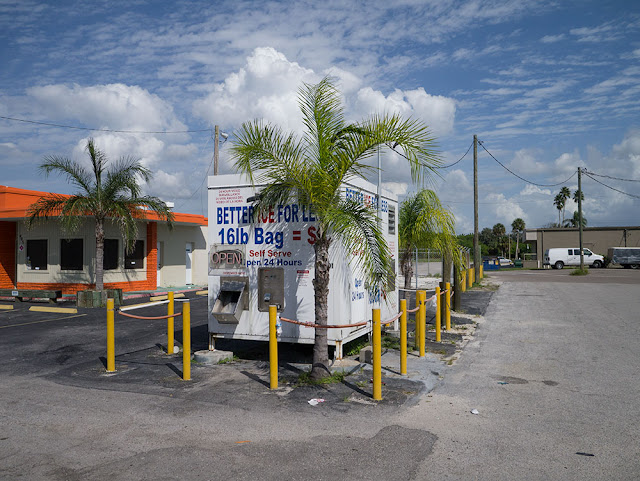