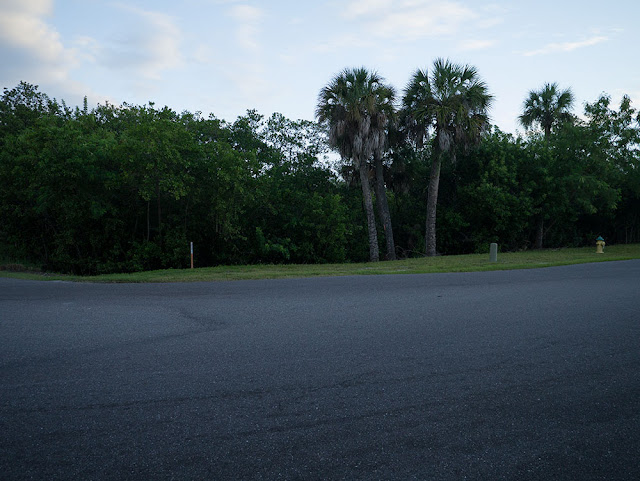 My trip down south in October had several different purposes. From North Carolina to Florida was the one remaining section of the country where I had not photographed the drive-in theaters. I had about twenty theaters on my list, though several of them proved to be gone. Also, I'd been invited to spend a week in Ruskin as Artist in Residence with The Firehouse Cultural Center. I was scheduled to make several presentations both for a general audience and for high school art students, and the stay ended with a two-day group workshop on digital photography.

Aside from that, I'd been asked to basically 'do my thing' around Ruskin and its vicinity—make photographs pretty much like the ones I post here, wander around and see what things hit the "take my picture" button. This was an unusual situation for me. There are places near my home in Connecticut where I return again and again to make photographs: to find new subject matter or new ways to see things I've photographed before. Also I pretty regularly get to spend an hour or two on "photo walkabout" in unfamiliar places I'm passing through. This residency was a chance to spend several days in a previously unfamiliar place, without any pressure to move on quickly to the next stop. I posted some of these pictures from the road. Eventually I want to edit the material down to about thirty pictures which I'll make into a web gallery for the Firehouse, and also a set of prints that will be exhibited in their gallery space sometime next year. Meanwhile, I'll be posting quite a few pictures from "The Ruskin Series" in the coming days. Seeing the pictures in the context of this blog will, I think, be an interesting part of the editing process.
Posted by Carl Weese at 3:05 PM

Email ThisBlogThis!Share to TwitterShare to FacebookShare to Pinterest
Labels: art galleries, behind the scenes, roads, Ruskin

did you notice the "number of photographs" per walk about change between the first days and the last days? How big is the Ruskin area? Did your have a chance to find, as you said about CT, 'new ways to see things' within that area?

That's a very nice shot. You really caught the way the evening light looks here in Florida. That soft blue is hard to describe.

Thanks James. I think part of what's going on is that this is, after all, the tropics. Dawn/sunrise and sunset/dusk seem to happen in speeded up time. I remember exactly the other side of the coin--slow motion--from travel to Moscow and in Sweden many years ago. Conveying the light from different regions is a fascinating challenge that I seem to have become much more aware of since I began doing extensive personal color work in digital capture.

Lyle, my rate of shooting probably stayed about the same. Because I was going to see the same things a few times, and then not again when the week was over, I tended to photograph the same things--the stuff that interested me--each time I encountered them. It will be an interesting part of the edit to see when "first thought best thought" turns out to be right, or when "better light on Tuesday" rules the day.

As an aside, with the "free film" of digital capture I don't worry about number of exposures and probably shoot on average 3-5 captures of a possible picture, and sometimes many more. During the edit, I always pay attention to when "first thought best thought" holds true (a LOT of the time) and when slogging through a dozen tiny variations in position or framing does in fact lead up to a final frame that gets it right. That's less common. But what seldom happens is that I shoot a long string--obviously because I'm not satisfied yet--and find the best shot to be somewhere in the middle. Not unheard of, but rare. Most long strings actually result in nothing. I was struggling to find the right answer because it wasn't worth shooting in the first place.

'over working' is a problem I also find in the darkroom. Look a negative, compare to a negative that prints well, decide on a time, etc, print it. Start screwing around with it, and its down the rabbit hole!

Lyle, sure, "down the rabbit hole" is one of my favorite teaching memes. To paraphrase David Vestal, if you are having trouble printing a picture, it probably isn't any good. Stop wasting your time and print a good picture. If you don't have any, go out and try to make some. Until you have good pictures, attempting to make good prints just isn't going to work.