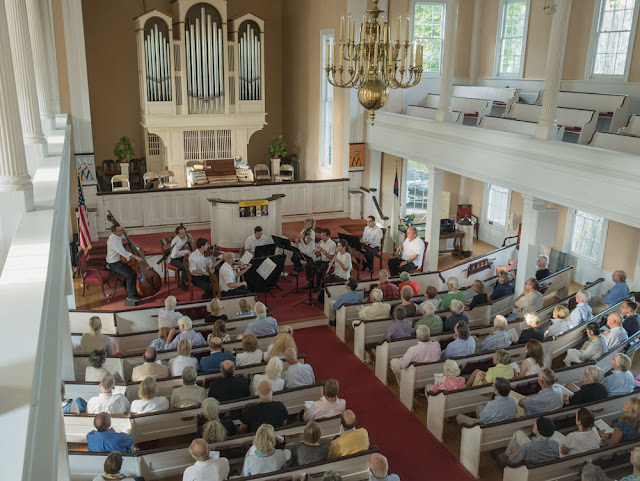 I've always been a short lens photographer, at least in my personal work, though of course I had to use long lenses for many situations over decades of professional photography. Recently I've been doing some pro bono pictures for the Washington Friends of Music, a non-profit that puts on concerts by the New Baroque Soloists. The concerts are staged in a classic, beautiful, church on the Washington Town Green. But there's only so many times you can show a view of the church interior on their blog before it gets boring. So I wanted to do tight shots of the players and hope to get a bit of the intensity they bring to their playing. However, the area below the pulpit where the musicians play is really dark on summer evenings. In the old days, I would have gotten out my 180mm f/2.8 Nikkor—and had a terrible time getting anything on b&w film, much less color. 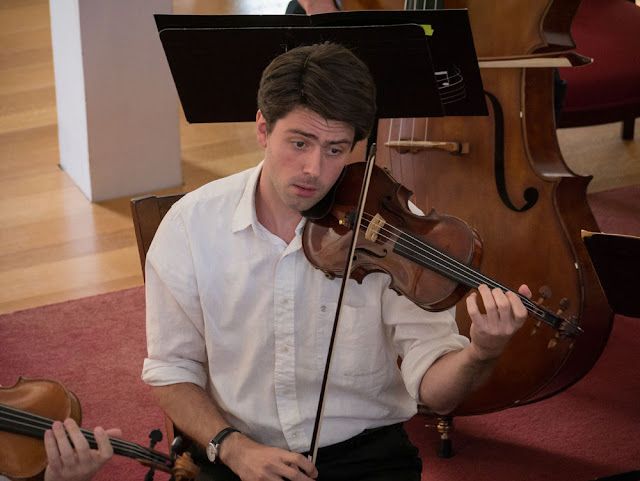 I don't have anything equivalent to the 180 for the m-4/3s digital capture equipment I use now. But, as long as I've been making pictures I've always, a couple times a year, usually May and October, done long lens landscape work, dealing with the color of those seasons and compressed perspective. So, I do have a Lumix 45-200, f/4-5.6, Varifocal. I couldn't justify $1300 for a pro-grade long fast lens to do those landscapes, especially since if you put the 45-200 on a tripod and stop it down to f/7.1 it works just as well...for about $250. That 180 Nikkor cost me something like $500 35 years ago. 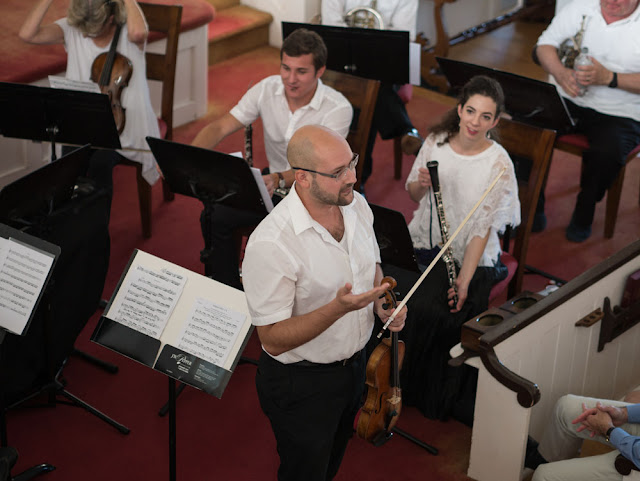 So then I started thinking. At the equivalent of 180mm, that lens is around f/4.5-4.7. Pretty slow. But, unlike the classic 180, it also has Optical Image Stabilization. So slow shutter speeds can be used, which opens the possibility of shots where, say, the musician's face is crisp but the bow hand is blurred. This might have a low success rate, but so what, it's free (digital) film. 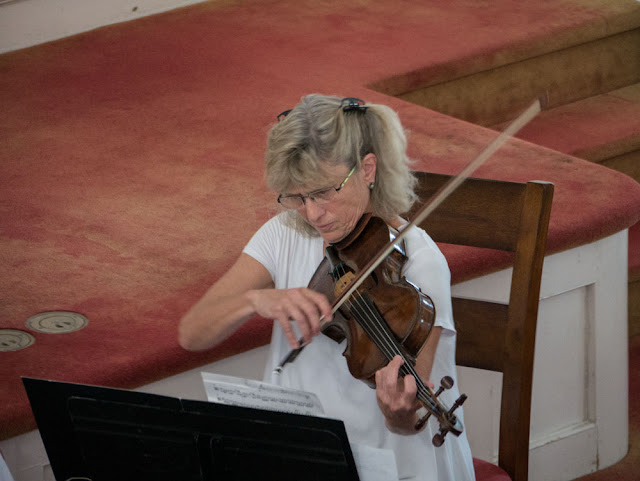 Nice effect. The camera that I could use the 45-200 on gives results at ISO 3200 that blow away anything I could have done in the past with T-Speed (Tmax P3200), much less any fast color film. Plus, at 4/3s format and f/4.7, the depth of field is much greater than a 180 on film at f/2.8, which could give a whole different look to this sort of picture. The Lumix GX7 also has a (really, not hype) Silent mode, so I could shoot during even the softest passages of music without anyone being distracted by me. 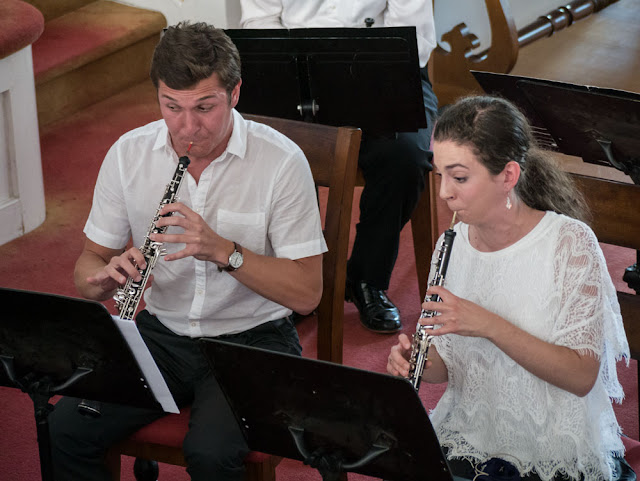 So, if I were doing this professionally instead of as a donation to a local non-profit, I'd order up one of these right away. But I've enjoyed seeing what I could force the 45-200 to do.

One more interesting sidelight. The GX7 has incredibly accurate, and even more important, reliable, AF. I thought I would be clever and set the AF to Face Detection, but it didn't work. Why? I realized that shooting from the balcony, which does wonders for simplifying the backgrounds, I'm looking at the faces at about a 45° angle, and that seems to be enough to confuse the algorithms.
Posted by Carl Weese at 8:20 PM

Carl, when you say "I don't have anything equivalent to the 180 for the m-4/3s digital capture equipment I use now..." I am guessing you mean in a prime lens as your 45-200 is equivalent to a 90-400? Is the angle of view the same? Also, I have always been confused with the Panasonic/Olympus interchangeable lenses. I thought one had image stabilization in the lens, the other in the camera body??? Thanks for posting and examples.....

Dear Carl,
I had the same experience than you.
I am now in a transition process from Canon to MFT (Olympus and Panasonic). The main reasons are the much smaller equipment – and the Olympus M.ZUIKO DIGITAL ED 40-150mm f/2.8 PRO Lens.
A great little lens with f2.8 at 300mm (equiv. FF)!!! And an excellent combo with the 1.4x converter.
This lens alone is a good reason to by a MFT-camera.
See here: http://goo.gl/6Ma6Sh

Lyle, not equivalent because not fast, the e-180 focal length is there but not the f/2.8 speed.

Some m-4/3s cameras and lenses have OIS and some don't. Olympus had in-body OIS before Panasonic. The GX7 has it, but not as advanced as recent Olympus bodies. When you mount a lens that has stabilization, the system automatically uses the in-lens OIS instead of in-body. But the GX8 that's coming out soon uses both at the same time. That should be interesting.

I too rarely shoot at longer than 45mm in micro 4/3, and have the 45-200. Whenever I use it I am amazed at what a bargain it was when I bought it years go. I did spring for the Lumix 12-35 f/2.8 and have never looked back. I have two GX-1s and two OM-D bodies and the 5 axis stabilization is the main reason I keep the Olympuses. It really does help with long lenses. As to Olympus menus and setups.....let's not go there:-)