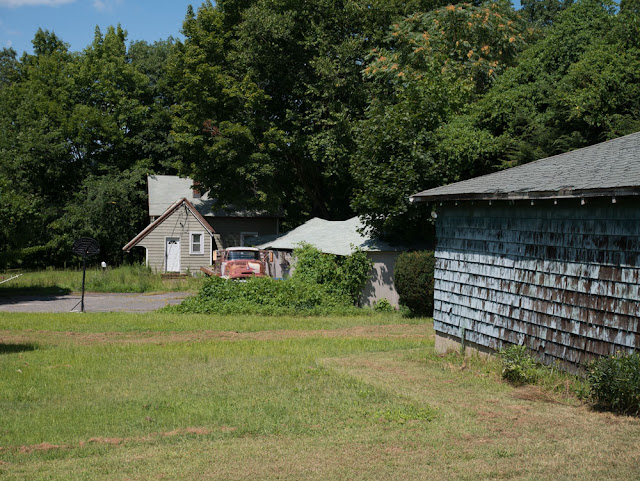 There was an interesting comment exchange about yesterday's shot from the plaza in front of the pizza place. (The first time I encountered a pizza joint claiming, "wood fired pizza," I misread the extremely poor signage as "wood fried pizza," and wondered what the hell that meant. I've used the term ever since.)

The exchange was about multiple things going on in a picture, in just some of it, while a lot of it might seem empty, but it works anyway. Of course that only happens if the places where nothing seems to be going on, do, in fact, have agency, and that somehow resonates with the action points.

What's the history of mowing the lawn here? What's the connection between the background overgrown place with the red and white antique truck and the hedge of bittersweet, and the adjoining property? Here in the foreground, it looks like someone was interrupted while doing a precise lawn mowing, burning it to the ground when it's only a few inches high so it won't have to be done again soon, but had to stop and go do something else. The garage would seem to be from the lawn mower's property, but is decades into the problem that someone, probably three owners ago, spray painted cedar shingles. The awful pigment could eventually wash away and leave the cedar shingles. It may even be a plan.

There's always a lot going on if you look.
Posted by Carl Weese at 8:27 AM

Email ThisBlogThis!Share to TwitterShare to FacebookShare to Pinterest
Labels: behind the scenes, buildings, seasonal light

Carl, he question that interests me in this discussion is how much of this type of thinking goes on in the field with camera in hand. Or do you just react visually to the scene and "discover" these associations during the editing process? Or maybe some of both. I find that I often learn a good deal about a photo I have taken while editing.

Edd, it's both. Ever since I first encountered the notion of gestalt (non-linear or holistic) thinking back in high school I've realized it's the way I want to make pictures. I want to see something all at once and capture it as a picture, not build it up piece by piece. But of course there are multiple pieces and what I'm responding to, all at once, is all of them. During editing the linear thinking comes in. David Vestal said that the second most important part of photography is studying our contact sheets. The editing process is where I find out what worked, and also why certain pictures work. The successes and failures are both educational. A couple years ago I did a long-form post at TOP about how to approach editing a large take, and one point I tried to make was that if you think editing is a drag that you just want to get through as quickly as possible, you ain't doing it right!

I find it interesting to identify patterns while editing. Like, if I shoot half a dozen frames that are variations of pretty much the same shot, is the best one first, last, or in the middle? This gives a hint of how into the moment I really was while shooting.