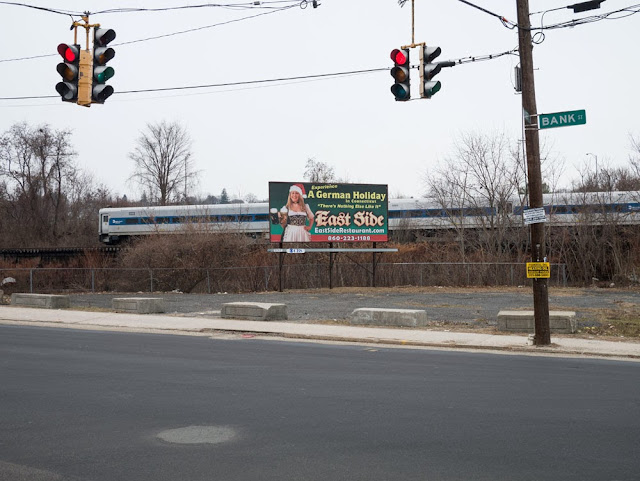 This billboard is clearly hunting me.

Martina, I find these appearances of the exotically dressed young lady with the steins of beer fascinating because, aside from the obvious, billboards advertising restaurants are rare around here. Are they common anywhere? Outdoor advertising (trade term for billboards) has a specific demographic and restaurants really don't fit in. Chain restaurants/fast-food-pushers, sure, but a single restaurant running an outdoor advertising campaign around half the state is strange. That gal is everywhere!

There is a restaurant in Waterbury that has its own private, permanent, billboard on a 100+ foot tower to be visible from the elevated I-84, another unique thing, but I've never gotten a picture of it that I think works well. That's also a thing I can't recall seeing anywhere else.

The only billboards in Mainz I recall right now, are either supermarkets or fast food chains, indeed.
Around the holidays many charities use them, too. Ah, and ISPs of all sorts, mobile phone companies, cable providers.
But these are clearly not food related companies - so they don't count.


Since the season is definitely over tomorrow in Germany I wonder if they are going to change the ad ...

Do you think it works? I have no idea. Would anyone go there seeing this "exotically dressed young lady"?

I also wonder what Markus Spring thinks about this (and about their website ... no comment from me about that right now). At least it's more or less his culture that is advertised here, not mine.

It had never occurred to me to look for their website. HA! I could handle getting outside of a big beer, but what do you want to bet there isn't a single vegetarian item on the menu?

The drinks part of the menu is probably ok for vegetarians...

We Germans call beer liquid bread - so yes, that will definitely suffice.

Carl, exotic is the correct adjective for her disguise, especially the combination of Santa cap and the demotically degraded Dirndl.

I just had a short look on the restaurant's website, and the first thing I saw was - French Fries! Now you find them in many restaurants in Bavaria, too, but in those place that are proud of their tradition they're a no go. But Bavaria as a source of stereotypes can bear that, too. Just think of it: Bavarians are clearly a minority on the Octoberfest, where more Chinese/Australian/Italian ladies wear a Dirndl than endemic ones, but to add insult to injury: Ditsch Brezels were for sale in the Munich train stations: Re-imported Brezel culture from New York.
Well, most things Bavarian are in decline, with the notable exception of the political party CSU (christian social union) which is its own tea party and got almost 50% of the votes, as many (rural) Bavarians aspire to meet even the worst prejudices ;)

Yes, Juha, the beer would be on my diet. Markus, I'm afraid I've never read anything on the regional differences within Germany (at least not since some chapters on European history back in high school). I'm sure the cultural traditions get interwoven with current politics.

Markus, you are kidding me:

Carl, we are not talking about regional differences but different peoples :-)

One thing that always amuses me btw is the Steuben Parade in which 99,99% of the German groups are Bavarians - while Steuben was a Prussian.

Ditsch Brezels from Mainz? Now I don't know if I should be relieved or even more insulted ;) Ya know, New York is "the big wide world" whereas Mainz...

Background information: Bavarians think themselves superior to all other German tribes (at least at home. The Steuben Parade is something completely different)

Ah yes, and if the native dwellers in Bavaria would have been that hostile towards immigrants as their present counterparts are, the Bavarians as such would never exist.

Just currently there is a debate about potential immigrants from Romania to Bavaria, who are broadly suspected trying to surrepetiously gain access to social welfare. That CSU now has formulated "Who lies, flies" (back home). As a lot of representatives of that party where caught cheating by hiring family members as support to be payed by the state, of course the left wing community especially in the social media was immediately laughing and putting up photoshop versions of the cabinet on a plane...