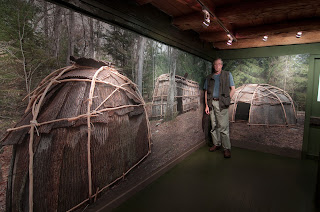 Washington, Connecticut
Early this spring the folks at the Gunn Memorial Museum—a local historical institute—asked me to help them with an exhibit they were assembling. They wanted to make two murals based on the authentic "longhouse" exhibits from the nearby Institute of American Indian Studies. They wanted some really big prints. One wall was about six feet high by fifteen feet long, the other about six feet square.

It was an interesting problem I'd never tried before. I ended up doing the captures with a Pentax K20D and Pentax 35mm macro lens. The long wall was photomerged in Photoshop CS4 from 14 captures, two rows of seven each. The smaller panel was made from two rows three captures across. Then I output the files in 2x3 foot sections with my HP Z3200 printer. Museum staff and volunteers did the actual assembly and installation. While the result is certainly not of the quality I'm used to for exhibition prints, I was pleasantly surprised at just how acceptable the mural installation ended up.
Posted by Carl Weese at 1:36 PM

The audacious scale of it makes me chuckle.