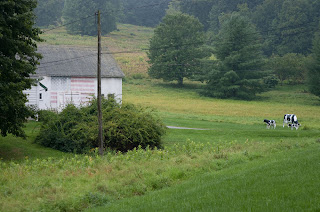 New Preston, Connecticut
Posted by Carl Weese at 6:00 AM

Convincing patriotism. In Germany this would clearly indict a very conservative/nationalistic position...

Markus, at this point simply to display a flag, even a large one painted on a barn, would not indicate an extreme conservative position here. There are other symbols, including recent adoption of the "Gadsen Flag," to denote a more extreme position. Extreme as seen from the mainstream: the extremists of course consider themselves to be the mainstream.

One side note here is that the condition of the painted flag makes me think it went up just about nine years ago, in the immediate aftermath of the 2001 September 11 attacks.

Well, I'm an old guy, and cranky sometimes, but I refuse to be embarrassed by the American flag. If that makes me an extremist, so be it.

Edd, as I said to Markus, I don't think flag displays here indicate extremism, or even conservatism: I know some staunch progressives who fly the flag, and flag decals are nearly ubiquitous on cars and trucks.

What I've heard from a number of friends in England and Germany particularly, is that they are surprised with the prevalence of flag displays here compared to what they see at home.

Flag displays in Israel peak during the weeks around the national memorial and independence days. Street vendors offer clip-on car flags that stand up from the car windows, making you look like a member of the German general staff from the '30s or '40s as you purr down the highways. At first, this was a very Likudnik (nationalist) thing to do, but it has become quite common.

Carl, Edd: At least parts of my (post-war) generation in Germany do have a quite high sensibility or even aversion against too many flags - the 3rd Reich was too brilliant in abusing them. And besides the soccer world championships you see flags almost exclusively for official purposes. On private houses they are very rare. Ultra-right-wing parties uses them (and some borderline flags from WWII, which are not all forbidden), and therefor that negative connotation here. I've well learned over the years that you Americans have a much less cramped relationship with your flag.

Marcus, I agree that flags and other political icons can be misused. And we do worry about that here as well--the wearing of flag lapel pins became a minor issue during our last Presidential campaign. But I think many Americans, including me, do not think of the American flag in a jingoistic or nationalistic way, but simply as a symbol of our personal affection for a country that has provided many freedoms and a pretty good way of life over the years.

I think Carl gets it right in his responses, and I hope that the day will never come our flag becomes a symbol of extremist viewpoints.