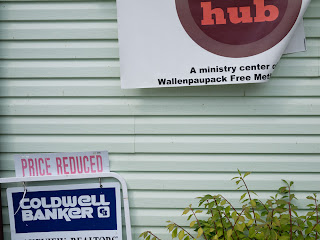 Email ThisBlogThis!Share to TwitterShare to FacebookShare to Pinterest
Labels: signs

Something is different about your work since you started using the Panasonic (I didn't realize you used to use an Olympus until I scrolled back a ways). I can't put my finger on the difference. Would you be willing to discuss your decision process for picking the Panasonic? Thanks.

Dennis, I use a lot of different cameras, formats, media. Each has an effect on the pictures...or I choose the camera for the effect I want, or the look I want.

As for why the GF1, I really wanted to see if micro 4/3s could be useful and the Oly version has three big strikes against it. Poor AF performance (I've had my fill of that from Pentax) a compact prime of the right length but wrong speed, and an EVF that, when I saw one months ago at an opening where someone was proudly carrying their new EP2, looked like a tail wagging the dog.

As for a change in the look of blog posts, well the format is fatter than I've been using, and the lens is a bit longer. The vast majority of my Pentax shots are made with the 21mm on its APS-C sensor, while I'm using the 20mm 1.7 on the 4/3s GF1.

To go aside, what I want is digital capture with my Leica M6 cameras. There's no such thing. Even if I could afford an M9, it is in no way a digital M6. The Panasonic is much closer than the Pentax is to that goal. Also closer than the Oly because AF has to make up for the loss of rangefinder focusing, and plain optical finders or coarse EVFs leave you dependent on the AF. The saving grace of the crummy EVF from Pany is that it clearly shows where the AF is trying to focus. The AF performance is so reliable that knowing where it's trying to focus pretty much means you can be confident it has nailed it. Without fast and reliable AF, this substitute for classic RF focusing isn't really workable.

Carl, thanks for the reply. It's interesting because Mark Hobson ( http://landscapist.squarespace.com/ ) uses an Olympus EP1 with the Panasonic 20 mm and notes the AF isn't bad. Are you saying that manual focus is not an option?

Dennis, I didn't realize Mark was using the pany 20 on the EP1. "Isn't bad" covers a lot of territory, though. AF that is sluggish but precise could be perfectly usable for calm shooting of fairly static subjects, but very frustrating if you want to, say, cover a protest demonstration or parade. AF at any speed that is prone to errors is endlessly frustrating.

For manual, I'd say MF is out of the question with the GF1 EVF. There just isn't enough resolution. The LCD however is excellent, so in a static situation, especially on a tripod, I'm sure MF with screen magnification could be very precise. But that's not how I want to use the camera.