I don't often discuss technical matters here, but this is a piece of news that will have a real impact on the way I work. In the latest updates of Photoshop/ACR, and Lightroom, a large selection of Pentax DA and DA Limited lenses are now supported for automatic correction of optical problems like barrel distortion and vignette. It's possible to correct these problems quite well using manual tools, but especially with distortion it's a drag because you not only need to apply the corrections but then also crop each picture afterwards. I never managed to make a batch action that would automate the process.

Here is a shot that appeared on this blog last spring. Shot with the 21mm, a lens with generally lovely image quality, but annoying barrel distortion. With all the action going on, I was willing to "live with" the distortion. 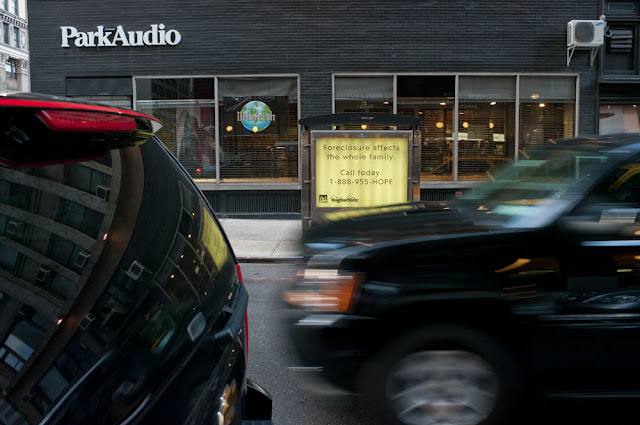 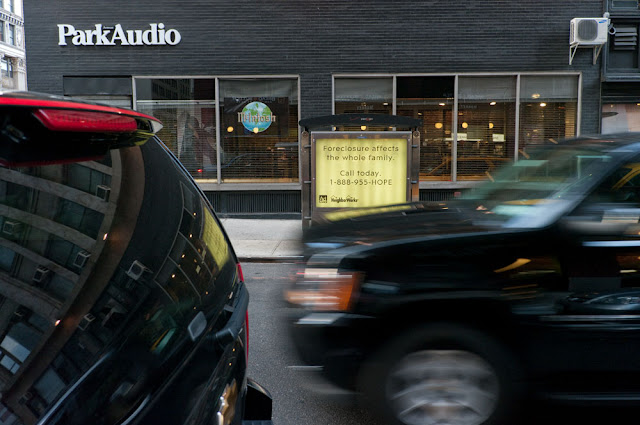 The formerly distorted straight line formed by the bright shop window frames is greatly improved. Corner vignette has also been lessened. Now, vignette isn't always a bad thing—in the old days lots of expert photographers routinely "edge burned" their prints under the enlarger to lead the eye into the center of the frame where the main subject tended to be—but starting out with a file that by default has low distortion and even illumination across the whole frame seems like the right idea to me. The software automatically recognizes the lens and applies the appropriate corrections, you only need to hit an "enable" button in the Lens Corrections panel of ACR, and it should be possible to save that as part of a custom default.

The "stack of pancakes" (DA limited compact lenses designed for digital imaging, at 21mm, 40mm, and 70mm) as well as the 15mm, 35mm Macro and also the older, pre-digital set of Limited lenses (31, 43, & 77mm for standard 35mm film format) are all supported. I haven't had a chance yet to see if the automatic correction also addresses chromatic aberration but expect that it does. I also haven't had a chance to see whether there is any trade-off for these corrections, like reduced resolution, but based on the results I've been getting with the Panasonic GF1—which had automatic ACR corrections for the 20mm lens from the get-go—I expect the results to be positive. I also expect I'll be using my Pentax equipment more now than I have been for the past few months, during which the GF1 has taken over nearly all my shooting.

Email ThisBlogThis!Share to TwitterShare to FacebookShare to Pinterest
Labels: photo-tech

Lyle, part of the apparent contrast gain is simply getting rid of the light falloff to the edges. There may well be other things going on. A whole new RAW interpretation, "the 2010 process" was introduced recently with the introduction of CS5 and ACR 6.x. This update is ACR 6.3 and I don't know what other tweaks are involved since my first interest was to examine the auto lens correction features.

This is another example of how hard it can be, even with the best of intentions, to test just one factor at a time. Rather than go back and examine a lot of existing files my inclination will be to try to do a substantial amount of new pictures of the kinds of subjects I like to work with, bring them into ACR with the lens corrections (and 2010 process) set as defaults, and see how they do.

As an aside, I find the 2010 process files a significant improvement in a number of different ways for Pentax K10/20D files, but distinctly worse for Olympus E1 files. Tina still uses the E1 for her reference shooting so I've set ACR's default to use the older '2004 process' when unpacking the E1 files.

One other thing. I just checked a file from the 21mm and along with taking out the barrel distortion, enabling the auto correction also fixed up chromatic aberration at least as well as the manual settings for CA correction that I had saved as a custom preset.

All very interesting, Carl, and I thank you for bringing this to our attention. However, ACR 6.3 requires Photoshop CS5, which, in turn, requires an Intel CPU.

Luckily, I really enjoy spending time in the virtual darkroom, with all the control and adjustments it offers me.

This is a cool feature. I generally just enable auto CA correction, which is as good as I can do manually. However, the distortion correction really helps my G11 shots at 28mm equiv. BTW I am doing this in LR.

Carl: I have to say I agree with you about the qualities of this lens. It's not spectacularly sharp, but so stable and reliable somehow.

I too find the lens correction feature excellent (I use Lightroom). I consider the precision of the chromatic aberrations correction more than compensates any loss of definition due to the warping correction - so it is an easy decision to apply all these by default... and eliminate unsightly bulges.

It has been possible to find such correction profiles for some time now, made and shared online by generous end users. A real community effort - it's not hard, just tedious and slightly finicky, to generate a lens profile using the publicly available utility. This utility includes a function to submit a completed profile to Adobe, who have just released a tool allowing them to be downloaded and user rated for quality (profiles may be more or less precise and complete, depending on the effort invested).

It's an excellent software model, in my opinion, where the user's and the software company's interests are completely aligned: both benefit if the fullest possible range of lenses is supported - and if it is not necessary to wait for Adobe themselves to obtain a lens, create a profile, and in due course, distribute it.

Oh - and laugh if you like, but for me the most pleasurable aspect of the Pentax 21mm pancake, is that velvet lined cap slipping on and off that flat little hood!